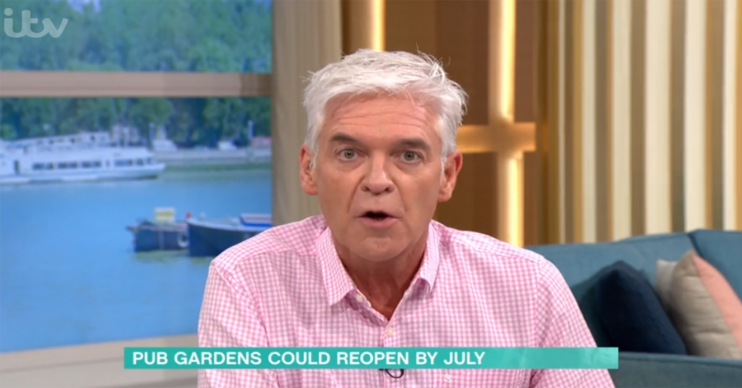 He made the statement during a debate on This Morning.

Along with Phillip, outspoken LBC presenter Nick Ferrari was in favour.

We now know how to socially distance.

“We’re getting better and better at it.

“You actually see people moving too closely and you think, ‘Oh my god look at them they’re way too close.’ We’re getting better at that now.

“So if there is a pub garden, a business that can open…mentally we’re all going crackers.

“Let’s get us out there, so long as we’re not mixing too closely, let’s go and have a pint.”

He said that businesses need to reopen ‘for the sake of the economy’.

But Holly Willoughby wasn’t so sure.

Currently, under government guidelines, people are advised to remain two meteres apart from anyone outside their household.

But Dominic Raab said recently that pubs could open again as early as July.

“Yes @Schofe let’s open the pubs let’s have a pint,” wrote one.

Another shared an insider’s view.

Read more: Coronavirus: Could pubs open as soon as July?

“Just watching your discussion re pubs opening,” they wrote. “As pub owners I think it is impossible to open partially. Unless we operate normally we won’t be able to take enough money to stay open! How do you get food & drinks to people?

“When normal will open.”

@Schofe @hollywills @thismorning. Just watching your discussion re pubs opening. As pub owners I think it is impossible to open partially. Unless we operate normally we won’t be able to take enough money to stay open! How do you get food & drinks to people?When normal will open.

#ThisMorning we are not all desperate to get back to the pubs. Don't want to mix with people at the best of times . Not desperate for football fans violence and drunk violent people on the street . If that is normal count me out #lockdown2020

Schofield trying to be the people's hero suggesting the stupid idea of reopening pubs. Eegit. #ThisMorning

Jesus we’ve done without pubs here in Ireland since early March before uk and won’t be opening till August.. ppl it’s a novel virus it needs a novel response #ThisMorning

What do you think? Is Schofe right and it’s time for a pint, or should we wait until it is safer? Go to our Facebook page @EntertainmentDailyfix and leave a comment to let us know what you think.