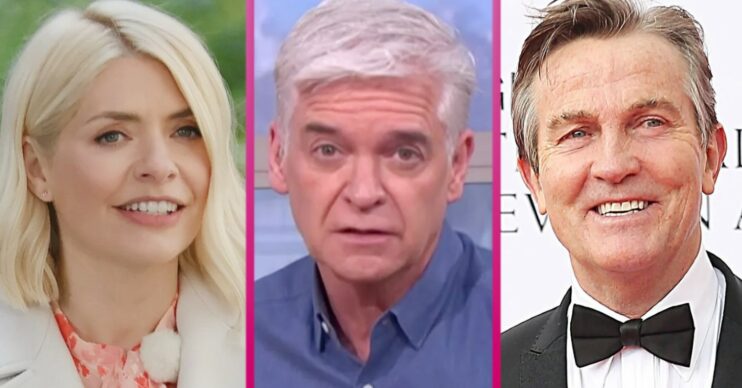 The popular TV duo have worked together on ITV’s This Morning for the past 11 years.

But in a shock turn of events, Holly is set to present Take Off with Bradley on BBC One.

Holly, 40, appeared on The One Show on Thursday evening to discuss her latest gig.

However, the star, who is currently on a summer break, seemed surprised to see Phillip during the chat.

She sat down with Alex Jones and Ronan Keating ahead of Take Off’s debut.

Ronan started: “You’ve got a brand new BBC show, which you are doing with Bradley Walsh, rather than with Phil.

“When you announced this, people online, they weren’t happy.”

Alex added: “Yeah, and you didn’t see this right at the top of the show, but it seems that Phillip, he sent us an exclusive video and he’s equally as shocked.”

A video from Phillip, 59, then played out to viewers.

In a mocked serious tone, he said: “Wow, that happened quickly. Break up for the summer and the next thing I know… is you’re with another man.

“Okay, okay, it’s fine! I’m obviously devastated, but I want the dog and the CD collection!”

Thankfully, Holly saw the funny side of Phil’s message.

She giggled: “That’s amazing! Do you know what, I’d love to say I’ve traded him in for a younger model… but that’s not the case with Bradley Walsh.”

"It gives us a bit of hope and something to look forward to."

Ready to 'Take Off' with Bradley Walsh and @hollywills? ✈️

Holly tells us all about the new show 📺

In addition, Holly added: “No, it’s not happening, no one’s being traded in I’ve got enough love in my heart for these two men one on the ITV one on the BBC.

“I’m the sandwich in the middle!”

Meanwhile, Holly and Bradley’s show starts on Saturday 24th July at 6pm on BBC One.

What is Holly Willoughby and Bradley Walsh’s new show about?

The show will see contestants battle it out for a trip of a lifetime, presumably to be taken post-pandemic.

The pair first fronted the show as a Christmas special back in 2019.

Sharing the trailer this week, Holly said: “Morning! How are you?… just got sent this through of my new show with @bradderswalsh it’s called Take Off… it starts this Saturday at 6pm on @bbc…

“So much fun was had filming this one and working with a total genius/wally.”

As well as her friendship with Phillip, Holly also shares a close bond with Bradley, 61.

Read more: How are Holly Willoughby and Bradley Walsh friends?

The Chase presenter has made several appearances on Holly’s This Morning over the last several years.