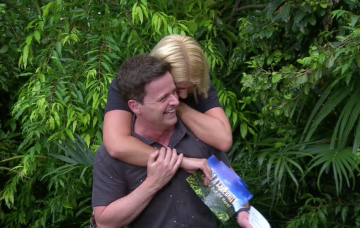 Holly Willoughby left Phillip Schofield in stitches as she climbed onto I’m A Celebrity co-host Declan Donnelly’s back while fleeing from jungle critters.

Phillip, who was watching at home, shared his joy with fans on social media when his fellow This Morning presenter completely freaked out after Emily Atack’s bushtucker trial.

The Inbetweeners actress, who finished runner-up to king of the jungle Harry Redknapp in last night’s final, had thousands of creepy crawlies poured into a transparent dome encasing her head.

After Emily successfully completed the trial, Holly went into meltdown as the bugs were released from the helmet and started scuttering across the jungle floor towards her.

Squealing with panic, she tried batting them away with her cue card before using Dec as a human shield by jumping onto his back.

The Geordie presenter found the funny side and looked exasperated as Holly continued yelping, while Emily desperately shook cockroaches and other insects out of her bra and shorts.

Dec joked to the TV crew: “Somebody help me here, for goodness sake!”

Back in the UK, Phillip posted to his 4.4 million Twitters followers: “Omfg @hollywills I can’t breathe,” with four crying-with-laughter emojis.”

As Holly tried flicking the critters away, she screamed: “Oh my God! This is horrendous! Why are they running towards us?”

I’m A Celebrity fans also took to social media to say how much they loved her reaction.

The best Im a celeb series ever! Holly absolutely made it! We had Kind caring celebs, and fantastic trials. Brilliant TV #bestdressed #HollyWilloughby #funnylady

Back in the treetop studio, Holly said: “Well done, Emily. You could tell the whole country was right behind her during that trial.”

Dec quipped: “You weren’t. You were behind me for most of it!”

After Harry Redknapp was named the series winner and the end credits rolled, Phillip tweeted: “That’s it!! @hollywills you have been AMAZING!!! now .. you’re a celebrity, get yourself out of there, I’ve got the margarita’s on ice safe flight home x”

* I’m A Celebrity… Get Me Out Of Here! is available on catch-up via ITV Hub.

Would you like to see Holly host next year’s I’m A Celebrity? Leave us a comment on our Facebook page @EntertainmentDailyFix and let us know what you think!