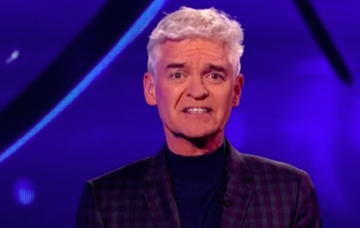 They're a brave bunch

Ice skating is more entertaining than ballroom dancing because of the risk factor, according to Phillip Schofield.

The Dancing on Ice presenter, 56, is convinced that hit BBC show Strictly can’t compete with ITV’s skating competition when it comes to danger.

Speaking to Daily Star Sunday, he said: “I adore Strictly and it is a fabulous show. But Dancing on Ice has this scary level of danger which that show doesn’t have.

“I’m so in awe of the celebs who agree to do our show. They don’t need to do it, but they do.”

He continued: “We all admit we love to see someone taking a spill. It’s fun to see someone landing on their bum. Obviously, we don’t want them to properly hurt themselves though!”

His comments follow a string of injuries suffered by this year’s celebs.

Singer Melody Thornton might have sustained the worst to date. A spokesperson confirmed to ED! that the former Pussycat Doll, 34, is undergoing chiropractor sessions after smashing her face on the ice during rehearsals.

Melody’s still scheduled to perform in the rink this evening. ITV bosses have insisted she’s been “constantly monitored” in the run up to the live show.

And last Sunday, Gemma Collins pitched forward during her live performance to land face-first on the rink.

She got up quickly to finish her routine, and although the TOWIE star reportedly needed a wheelchair later on, she was back on the ice within days.

It seems Gemma’s boyfriend James Argent is feeling the strain as much as she is.

In a conversation on Loose Women, Arg admitted that while he’s proud of his girlfriend and the journey she’s gone through on the show, he’ll be relieved when she’s finally out of the spotlight.

Corrie’s Jane Danson has also fallen victim to the risks of ice skating. She fainted during rehearsals, and alarming photos showed the actress being tended by medics and carried away on a stretcher.

According to Phil Schofield, DOI is so dangerous that producers have strict “contingency plans”, with a scale of action to deal with incidents ranging from minor scrapes and bruises to more serious injuries.

He explained that DOI has its own initial physio group serving as a minor injury unit, but there are medics on site and a hospital near the studio if needed.

Do you think the celebs will complete the next live show unscathed? Leave us a comment on our Facebook page @EntertainmentDailyFix and let us know what you think.