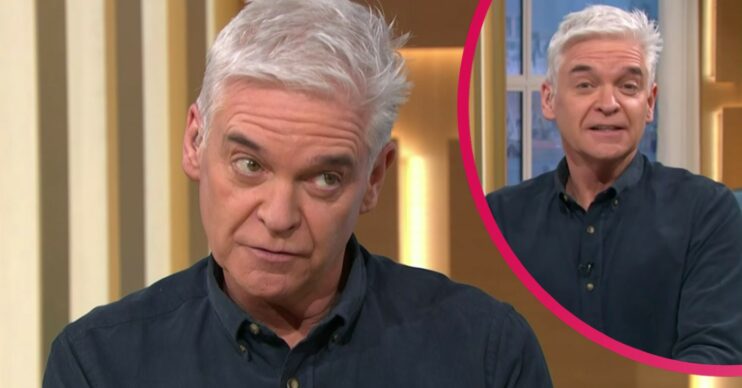 Phillip Schofield apologises on This Morning after viewer ‘swears’

The viewer was complaining about her 'dramatic' mother-in-law

Phillip Schofield was forced to apologise after a viewer swore on This Morning today (January 18).

Rochelle Humes couldn’t help but laugh when her co-host slipped out the word “a**e” during a phone call with the viewer.

And Phillip continued to say the word after the segment!

The presenters were joined by Vanessa Feltz on Tuesday’s show for a phone-in.

Viewers were calling and texting in for advice on their dilemmas surrounding in-laws.

Among one of the viewers was Jo, who asked for help with her “dramatic” mother-in-law.

Jo explained that her partner’s mum often made a fuss out of situations, with Rochelle asking for an example.

The caller attempted to give an example before blurting out: “She’s just a pain in the a**e!”

But as the segment came to an end, Phillip repeated the naughty word once again.

Vanessa asked him: “How many times can we say the A word?”

Phillip replied: “We’re not allowed and I haven’t even apologised yet. Sorry.”

The group continued to giggle before going to an advert break.

And the moment didn’t go unnoticed with viewers at home.

Many took to social media to comment on the segment.

Alongside a laughing emoji, one tweeted: “I suppose saying a**e is better than bag of [bleep] #ThisMorning.”

Another posted: “My mother-in-law is a pain in the a**s – least she’s honest #ThisMorning.”

“Hahaha pain in the a**e #ThisMorning,” a third shared, while another said: “She said a**e on TV! #ThisMorning.”

In addition, a fifth added: “So this woman doesn’t really have an example as to why her mother in law is a pain in the a**e?? #ThisMorning.”

Meanwhile, Phillip and Rochelle were forced to apologise after laughing at a viewer for having a phobia of custard on yesterday’s show.