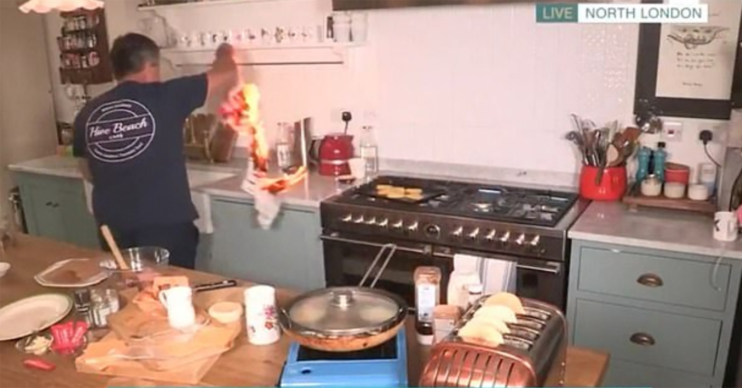 He set his fire alarm off

TV’s Holly Willoughby and Phillip Schofield shouted as John Torode almost caught his kitchen on fire on This Morning.

The chef appeared on Tuesday’s programme to show them how to make a McDonald’s breakfast McMuffin at home.

However, it didn’t go to plan and John set his fire alarm off after a kitchen towel caught on fire.

Read more: James Martin divides This Morning viewers with ‘out of touch’ recipe

He was showing Holly and Phil how to cook the burger patties.

Behind him was a kitchen towel placed on top of an oven hob and it quickly caught fire.

John, tea towel is on fire! Behind you!

As the flames started getting bigger, Holly shouted: “John, your tea towel is on fire!”

Phil exclaimed: “John, tea towel is on fire! Behind you! Behind you John, you’re on fire! Fire John!”

John turned around and shouted: “Thank you!” as he quickly lifted the tea towel and put it into the sink.

He managed to stop the fire by pouring water onto the tea towel.

Holly and Phil were gobsmacked and put their hands on their heads as they watched John put it out.

Holly asked: “Oh my gosh, are you okay? You were so calm.”

John said: “I’m all good, I’m here!” as he continued with the cooking.

However, seconds later, John’s fire alarm started going off as Holly and Phil burst into laughter.

'Behind you @JohnTorode1, you're on fire! FIRE JOHN!'

Phil said: “Oh I love this show so much!”

Holly added: “Give it one of those,” as she waved her tea towel in the air.

John switched off the alarm and said: “We’re all back now and calm.”

Viewers were in hysterics over the mishap and shared their thoughts on Twitter.

One person said: “John Torode’s tea towel setting on fire on live TV has honestly made my week… poor guy.”

Another wrote: “Absolutely lost it at @JohnTorode1 tea towel going on fire live and now his fire alarm going off. Only on This Morning.”

A third added: “Can’t get over the fact I just witnessed John Torode almost burn his kitchen down on live television.”