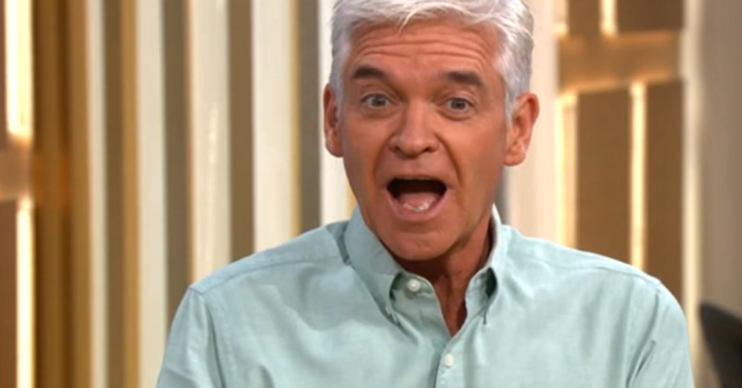 Viewers weren't impressed with the hosts

This Morning fans weren’t impressed with the behaviour of show hosts Phillip Schofield and Holly Willoughby today after they started messing around during a medical segment.

Dr Zoe appeared on This Morning to discuss migraines and how to cope with them.

The medical condition affects so many people in various different forms. Even Phillip himself admitted he was a sufferer.

Why did Holly and Phil get the giggles?

But as Dr Zoe started talking about possible aids to ease the pain of migraine, one thing in particular got Phil and Holly giggling.

Phil decided to try on a cold cap remedy. To be fair, he did look quite funny wearing the hat and even compared himself to Violet Beauregarde from Charlie and The Chocolate Factory. Although some viewers pointed out he actually got her mistaken for Verruca Salt.

Both Holly and Phillip immediately got the giggles, but the hilarity started to distract from the real topic.

As Dr Zoe carried on showing other products that could help sufferers, Holly and Phil were talking over her, making jokes.

What did This Morning viewers say about Holly and Phillip?

Viewers at home weren’t impressed with the hosts’ behaviour. They insisted they should ‘show some respect’ to Dr Zoe and to those who suffer terribly with migraines themselves.

Jesus, Holly and Philip are so rude to Dr Zoe and talking and laughing over her because ‘someone’s wearing a funny hat’. Some of us want to listen! #ThisMorning @thismorning

Jesus, they are so rude. #ThisMorning

When Holly & Smug start laughing & joking through when I’m talking about migraines I’d be raging. #ThisMorning

There were some who found it funny though, and laughed along with the hosts.

I’m laughing at Phil today he’s getting all the rubbish jobs, squeezing a tin can!

Never laughed so much, u really can’t beat this morning ❤️

Show regular Vanessa Feltz featured in a travelogue from Mallorca. She made a startling confession that she had shared her first kiss, aged 10, with none other than superstar DJ Pete Tong!

Deirdre also helped viewers struggling with lockdown during a phone-in, and John Torode helped Holly and Phil cook up a crab linguine.

Holly’s was declared the best of the two offerings, leaving her delighted.

Meanwhile, earlier in the show, the presenters had gone head-to-head with each other during a Disney drawing masterclass, in which they were talked through how to draw Olaf by a Disney artist.

Holly also won that round and after the cooking triumph too, she cheekily asked: “Have I won twice today?”