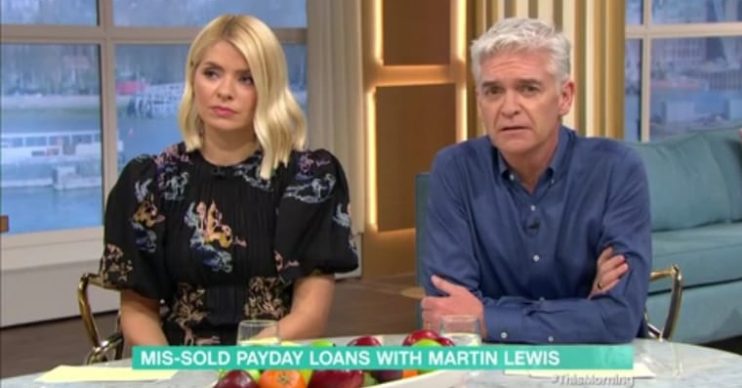 There’s ONE rule on morning TV

Philip Schofield was left red faced on This Morning today when he had to apologise after Martin Lewis let slip a swear word in his morning finance slot.

The Money Saving Expert is famous for his passion about finance and debt, and he’s well-versed when it comes to TV appearances – so today was a shocker.

Martin was on the show to talk to Holly Willoughby and Phil about online advertising, and the pitfalls of investing in loans while under the influence of alcohol.

On this occasion though he lashed out in a rant about payday loans.

Read more: Martin Lewis reveals millions are over paying on their bills

The expert even warned viewers about what was coming next, when he quipped: “Excuse the vernacular.”

He said, “There are late night gambling adverts and there were many people who – if you excuse the vernacular… people who were [bleeped] at night.”

Without pausing to take a breath he continued: “They saw [payday loans] as instant money and started to borrow when drunk… that’s not acceptable…”

Phil and Holly were a bit taken aback, and while Martin continued chatting, Phil patiently listened before turning to the camera and mouthing the word ‘sorry’ to viewers.

A candid apology for the casual swear word, but viewers were quick to pick up on the naughty faux-pas, sharing their thoughts on Twitter.

One viewer couldn’t believe their ears, and stated: “Did Martin Lewis just swear?”

While another commented how ITV should fire him: “Martin Lewis swearing live on TV. Naughty. Sack him immediately.”

Leaving no doubt to the reference of the earlier swearing on ITV by Sharon Osbourne.

The former X-Factor judge was invited to join Piers Morgan and Susanna Reid on a star-studded panel at The Oscars, and dropped the F-bomb.

Piers jumped up with an apology, saying: “We just have to make an immediate early apology for some profanity we heard earlier.”

Being put in her place Sharon quickly replied: “I am so sorry I didn’t know we were on air.”

Did you hear all of the [bleeps] today? Leave us a comment on our Facebook page @EntertainmentDailyFix and let us know what you think of this story.