Miriam Margolyes appeared on today's This Morning and, like usual, she left hosts Holly Willoughby and Phillip Schofield in hysterics.

The actress was on the show to promote Sydney & The Old Girl, a play she's appearing in, and she amused the hosts as well as viewers with the chaotic interview.

As the conversation turned to Miriam's stint in Call The Midwife, Phil mentioned that she can do a pretty good Scottish accent as he revealed the next episode is set in Outer Hebrides. 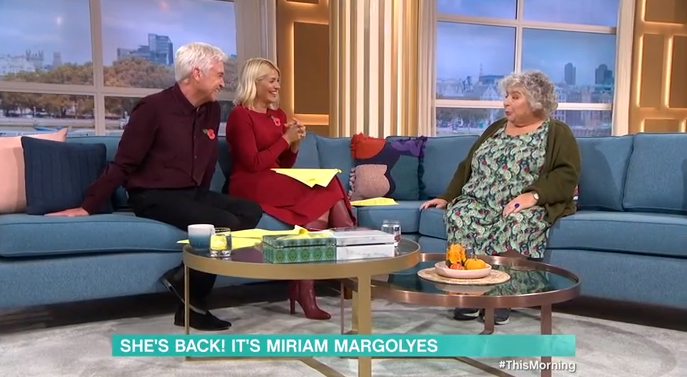 Miriam mouthed the f-word on the show (Credit: ITV)

The 78-year-old star then launched into a Scottish accent and Phil said she had a "touch of the Maggie Smith", who puts on the accent in the Harry Potter films as Professor McGonagall.

"Not that I’m rubbishing Maggie Smith because she’s a great lady. I'm [mouths the f-word] scared of her actually."

Holly and Phil burst into fits of laughter as she told Miriam: "You can't be scared of her, not you!"

Miriam said: "Of course, she’s quite something.

Our chats with Miriam Margolyes are certainly NEVER boring! 😂 pic.twitter.com/bGjg0HggpO

"But she is a great ornament to our profession and we’re lucky to have her around. Don’t tell her what I said!"

Phil quipped: "Apart from the fact you’re on the telly but it’s okay," to which Miriam admitted: "I forget that."

Not that I’m rubbishing Maggie Smith because she’s a great lady.

Elsewhere in the interview, Miriam left Holly and Phil giggling as she mistakenly called Diwali, "doolally".

Admitting she "loathes" Halloween, Miriam said: "I can't bare it. I think the whole thing is an American invention, I loathe it.

"Christmas is fun, food. And doolally.. doolally... oh Diwali. Doolally is the other thing. That's not politically correct. I will have my sari snapped." 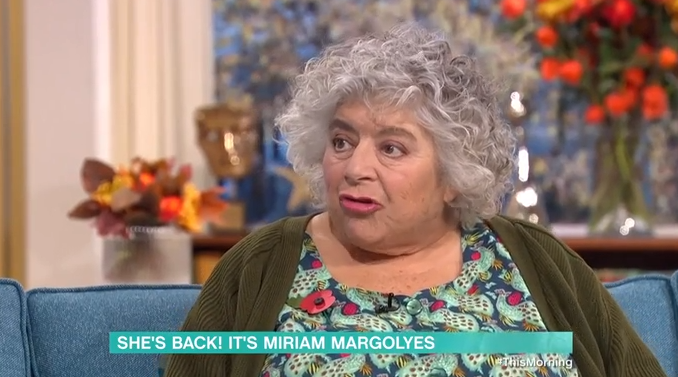 Phil said: "But you'll get away with it!"

Viewers were in hysterics over Miriam's interview and shared their thoughts on Twitter.

Another wrote: "Miriam Margolyes is an absolute legend! (and as a Glaswegian, I think her Southside accent was perfect!)"

Miriam Margolyes is an absolute legend!🤣❤💕

(and as a Glaswegian, I think her Southside accent was perfect!👏👍)#ThisMorning