A This Morning caller left Holly Willoughby and Phillip Schofield in hysterics after making a rude remark about her boyfriend on air.

Viewer Rebecca phoned into the show to get advice from agony aunt Vanessa Feltz about how she can get her partner to pop the question for Christmas.

Rebecca told the trio that she's been dropping huge hints to her boyfriend to propose for eight years. 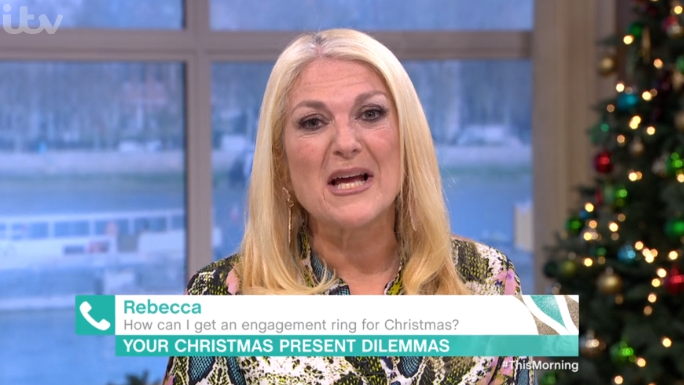 Rebecca told the hosts: "I have been after the big diamond for Christmas for the last eight years and my partner is just not getting the hint.

"Do you want to know what he bought me last year? A thermal gravy jug."

Phil joked: "It's not very romantic but it's really practical."

Rebecca continued: "I send him pictures of my hand pointing to the finger. I think I'm going to have to pop the question myself."

Phil asked: "Do you have any idea in your mind why he hasn't done it? You couldn't have hinted any more." Phil and Holly were amused by Rebecca's comments (Credit: ITV)

Rebecca said: "Well, I know it will happen but it would just be the most perfect gift if he got down on one knee in front of the most gorgeous Christmas tree and handed me a ring and not anything for the kitchen.

"This is my plan. Tonight, candle lit dinner, I'm going to say, 'Greg, let's sit down and watch the TV,' pre-recorded, Holly, Phil and Vanessa... boom."

Vanessa suggested: "This may be a little bit saucy but that never hurts. You could incorporate a little bit of Panto and you could say to him, 'I would happily rub your lamp if you would just make my wish come true,'" as Holly and Phil gasped.

Rebecca then said: "Vanessa, I'm going to rub all night," as the hosts burst into laughter.

Vanessa exclaimed: "Give the lamp a rub, it could make such a difference! When he knows you rub it like no-one else why wouldn't he want to marry you?"

Holly said: "Rebecca, you are my favourite call ever by the way."

Rebecca, you are my favourite call ever by the way.

Gasping, Rebecca said: "Phil, that would be amazing! Right, I'm on it." 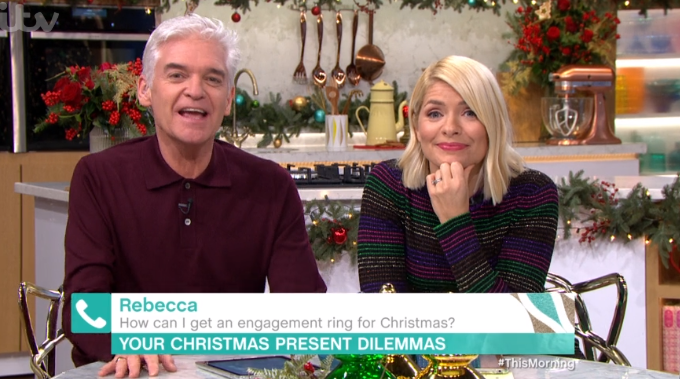 Holly asked: "And if it happens, could you let us know please?" to which Rebecca said: "Oh yes, you'll all get an invite. Vanessa, get your hat ready!"

Vanessa added: "100 per cent, going out to get one this afternoon."