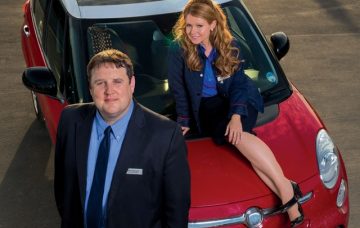 The BBC has released a trailer for a new, completely improvised special of Peter Kay’s Car Share.

Excitement is mounting among fans for the “Unscripted” instalment on Bank Holiday Monday on May 7, which will be followed by the final ever episode at the end of next month.

The trailer opens with a voiceover from co-star Sian Gibson announcing: “Car Share is back but not as you know it.”

A clip shows Peter’s character John singing along with her to The Buzzcocks’ hit Ever Fallen in Love (With Someone You Shouldn’t’ve) on fictional radio station Forever FM on the car’s stereo.

Peter goes on to explain how they came up with the idea to improvise the whole episode, which will be the penultimate one.

He says: “We wanted to try something special — what would it be like if we filmed a whole journey without a script, just making it up and basically seeing what happens?”

Viewers were left gutted by the end of the last series after John finally reciprocated Kayleigh’s romantic advances with a message to her on Forever FM, but she never got to hear it.

They demanded a new episode to give the pair a happy ending, and Peter answered the calls with the forthcoming final two episodes on BBC1.

Fans have now taken to social media to share their joy over the new trailer.

So looking forward to the two Car Share episodes! Why isn’t it the 7th May yet? 😂😂😂 #PeterKay #peterkayscarshare #CarShare

Not long now…
The Car Share Finale will appear on our screens in only one month!#CarShare pic.twitter.com/ziU3M6Of21

* Peter Kay’s Car Share: Unscripted is on BBC1 on Bank Holiday Monday, May 7.

Are you looking forward to it? Leave us a comment on our Facebook page @EntertainmentDailyFix and let us know what you think!