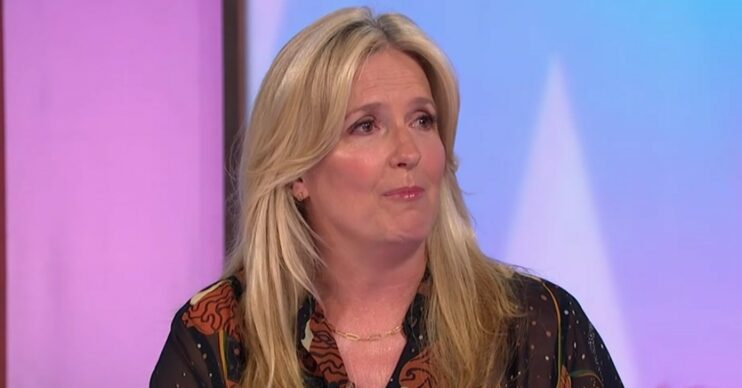 Loose Women: Penny Lancaster breaks down as she admits to ‘losing grip’ during menopause battle

The panellist was overcome with emotion

Penny Lancaster broke down in tears on Loose Women, as she opened up on her battle with the menopause.

After Ruth explained that the show was launching a ‘Menopause Manifesto’, Penny shared her own struggles.

The manifesto is to help educate the public on the menopause and its side effects.

Opening up on her battle, Penny revealed that she recently visited a doctor for advice.

She said: “I had a few tears with her, I was trying to explain what I’ve been going through in the last few months.

“She said to me, you’ve got to get to the point where you say to yourself, ‘I see you’. Where you actually…”

Penny became choked up and was unable to finish her sentence.

The mum-of-two later went on to reveal that the menopause has affected her mental health.

She shared: “Anxiety’s gone through the roof. Where I’ve always been very patient, I feel like I’m losing grip.

“When I spoke to my GP – all we’re talking about [with the manifesto] is getting GPs trained properly, because the first thing they said was, ‘Well let’s put you on an antidepressant.’

“I was like… I just need something to help me balance, to take the edge off the upset, the anger, the frustration, the anxiety, all those things. It helped a little bit but that was once again a little band aid.”

Thankfully, Penny admitted that she’s starting to “find a balance” and often speaks to her husband, Rod Stewart.

The star went on: “Fortunately, through Loose Women, I got some advice to see a specialist and for the last six week’s I’ve been on the [HRT] treatment, I’ve come off the antidepressants and I’m finding a balance now.

“I’ve stopped the hot sweats. I’m still suffering from anxiety. It’s trying to sort itself out but I’m getting there.

“Being able to talk to my husband is a number one priority.”

Penny wasn’t alone in the discussion, as Ruth and Jane also shared their struggles.

Meanwhile, viewers at home appeared to relate to the panel.

Many rushed to Twitter to praise Penny for speaking out.

One said: “Great news on @Loosewomen, thank you for setting up your Menopause Manifesto. I was crying along with Penny today as I’m exactly where she is.

“HRT is helping with the physical stuff, but I am losing myself with the mental stuff.”

Great news on @Loosewomen, thank you for setting up your Menopause manifesto. I was crying along with Penny today as Im exactly where she is. HRT is helping with the physical stuff, but I am losing myself with the mental stuff.

@loosewomen Wonderful to hear you all discussing Menopause, shame we have to tbh. Felt it for Penny, know exactly how u feel! Stay strong xx

Put @loosewomen on accidentally but just in time for their menopause manifesto campaign. Penny Lancaster talking through tears about how she was affected by menopause is very important. Well done to them all xx

Thank you Penny @loosewomen I’m crying here with you ❤️

Another added: “Wonderful to hear you all discussing menopause, shame we have to tbh. Felt it for Penny, know exactly how u feel! Stay strong.”

In addition, a third said: “I absolutely feel exactly like Penny. I feel like I have totally lost myself!”

A fourth commented: “Oh Penny, you made me cry just now. I feel like I am emotional wreck and I don’t understand why am I so emotional.”

Another penned: “Thank you Penny @loosewomen. I’m crying here with you.”