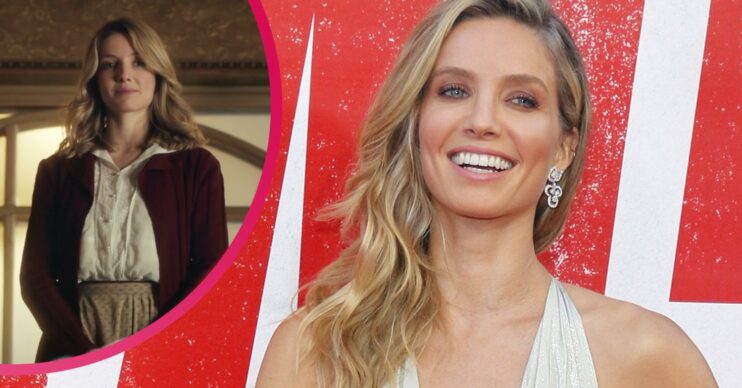 Peaky Blinders on BBC One: What happened to Tommy Shelby’s wife Grace? Who played her?

Grace has haunted Tommy ever since her tragic demise

Peaky Blinders fans will know that Tommy Shelby has never recovered from the death of his first wife Grace.

In the last series, the anti-hero was haunted by the memory of his late wife.

In fact, in the horrifying closing moments of the last series, he saw a vision of her as he held a gun to his own head.

Some might even argue he wants to join her in death.

So what happened to Tommy Shelby’s first wife Grace in Peaky Blinders?

Here’s everything you need to know about the character, and who played her.

Who was Tommy’s first wife Grace in Peaky Blinders?

She worked in The Garrison, the pub run by the Peaky Blinders gang.

Unbeknownst to her employer Tommy Shelby, the Irish barmaid was working as a secret undercover agent for the Birmingham Police.

Her mission involved getting close to Thomas Shelby… Which she did (and then some).

Although she hadn’t banked on falling in love with him.

Tommy fell hard, too, and was heartbroken when he discovered her treachery.

Grace left for New York, returning in 1922 having married an American businessman.

However, it soon became clear that her heart still lay with Tommy.

The pair reunited, and Grace got pregnant with their son Charles.

They married in 1924, which was made possible by her first husband’s suicide.

What happened to Tommy’s wife Grace in Peaky Blinders?

Tragically, Grace was murdered in the third series of Peaky Blinders.

The 30-year-old was killed from a bullet that was meant for her husband – something he will never forgive himself for.

The tragic incident happened at a party.

(Never attend a Shelby party is our advice, just look at what happened in series 5!).

Vicente Changretta hired an Italian assassin to carry out the murder.

The assassin was brutally murdered in return by Tommy’s avenging brothers.

Sadly, it was too late for Grace and she died in the arms of her husband Tommy (Cillian Murphy).

Why does she haunt Tommy?

After her death, Grace has appeared in opium-fuelled hallucinations.

Tommy remains grieving for his dead wife, long after her death.

He takes the drug in order to be able to see Grace again.

He has never forgiven himself for her death.

But, although he and former prostitute Lizzie are good friends, it’s clearly Grace he still loves – something Lizzie has made her peace with.

Annabelle Wallis portrayed Grace from 2013 until her character’s death in 2016.

However, she also appeared as her own ‘ghost’ in series 5 of the drama which aired in 2019.

Annabelle Wallis, 37, is also known for her role as Jane Seymour in the period drama The Tudors.

She’s also played Mia Form in the supernatural horror film Annabelle, and Jenny Halsey in the adventure film The Mummy.

The Oxford-born actress – no, she’s not Irish like her Peaky Blinders character! – has also starred in Strike Back, Pan Am, Fleming, and The Loudest Voice.

As well as having a very famous ex-boyfriend in the shape of Coldplay’s Chris Martin, she’s also part of the legendary Harris acting family.

Her great-uncle is Richard Harris, and her cousins include Jared Harris.

Annabelle is currently in a relationship with Star Trek actor Chris Pine.

Peaky Blinders returns with series six on Sunday February 27 2022 at 9pm on BBC One.

Are you looking forward to series six of Peaky Blinders? Leave us a comment on our Facebook page @EntertainmentDailyFix.