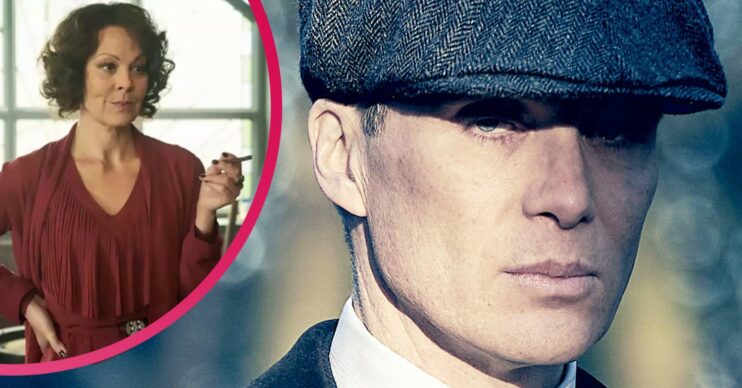 Helen McCrory's character Polly was written out after her death

Peaky Blinders made a triumphant return to BBC One on Sunday as the sixth and final series began – and here’s our episode one review.

Fans of the show have been patiently waiting to see what happened to Tommy Shelby after the dramatic season five finale in 2019.

It’s been almost two years since the series last aired, as a result of Covid and the tragic death of actress Helen McCrory.

But ED! can confirm it was worth the wait.

***Warning: spoilers from episode one of Peaky Blinders series 6 ahead***

Having failed to assassinate his enemy Oswald Mosley, Tommy stormed into the misty fields with nothing but a gun and a head full of demons.

Viewers saw Tommy holding the pistol to his head.

In nail-biting scenes, we saw Tommy pull the trigger and fall to the ground – alive, but a bit muddy.

In an unexpected twist, Tommy’s brother Arthur had removed the bullets from the gun fearing the worst about Tommy’s state of mind.

Okay, so he could have tried again once reunited with the bullets, but what would Peaky Blinders series 6 be without Tommy Shelby and his ice-blue eyes of steel?

Polly Shelby’s death – how did they write Helen McCrory out?

Of course, Peaky Blinders fans were all wondering how the iconic Aunt Polly would be written out of the show.

And the scriptwriters paid tribute perfectly, as well as dedicating the episode to her memory.

Aunt Polly – and the late actress Helen McCrory – would have been proud.

Tragically, Helen McCrory died of cancer in 2021, and did not film any scenes for the sixth series of Peaky Blinders.

So viewers were unsure what would happen to her alter-ego Aunt Polly, who was the Matriarchal backbone to the show.

She told Tommy that the IRA killed Polly to “take away Tommy’s crutch”.

Captain Swing told Tommy that the assassination attempt on Oswald Mosley was stopped by three Dublin brigades of the Irish Republican Army.

She said: “We need to keep Mr Mosley alive.

“That’s all you need to know.”

Tragically, the IRA felt that killing Polly was the only way to make Tommy totally dependent on them.

They returned her body wrapped up in white sheets so she could be given a proper Romany funeral.

Devastating scenes saw the family come together at the funeral pyre of Polly – a burning Gypsy caravan.

We can only assume that she was buried with her betrothed Aberama Gold, who also died at the end of series 5.

RIP Aunt Polly, you will be missed.

But, it was clear he’s dead inside.

As his wife Lizzie put it, Tommy hasn’t been the same since Polly died.

He’s been teetotal those four years, but everyone still wants him to drink.

Tommy now speaks French fluently and, despite quoting poetry and insisting he’s “a calmer and more peaceful person”, he seems colder and meaner than ever.

We’d go so far as to say he’s like a ticking time bomb waiting to go off.

As series six kicked off, we were reminded of Aunt Polly’s prophesy.

She told Tommy in series 5: “There will be a war, and one of you will die, but which one I cannot tell.”

And the hatred between Tommy and Polly’s son Michael Gray continued to deepen.

After his mother’s death, Michael spat: “Mum, it was the ambition and strategies of one man that caused this.

“I swear on the name of Almighty God, no matter what it takes, no matter how many lies I have to tell, I will take revenge on Tommy Shelby.”

Later, when he lands in jail as a result of Tommy setting him up, Michael tells wife Gina: “Some of my business with Tommy Shelby is unfinished.

“This is my opportunity to finish it.”

The pair seem set to fight to the death – but who will come out on top?

Peaky Blinders episode one review – when is series six set?

It was the night that prohibition ended, and the date was no coincidence.

Tommy was on Miquelon Island, on Newfoundland French Territory – and his cousin Michael wasn’t far behind.

The epic gangster drama saw them reunited for a temporary truce.

And he wanted to do business with Gina’s uncle Jack Nelson, who is a big cheese in Boston.

And if Uncle Jack doesn’t comply?

Tommy threatened to sell the opium to the East Boston Jews, which would shift the balance of power between the Irish, Italians and Jews.

A return to form for Tommy so far, who seemed to have the upper hand.

Especially when he set Michael up by tipping off border control about the contents of Michael’s briefcase and lands him in Norfolk Prison, Boston.

But it’s only a matter of time before a livid Michael is released and will want revenge.

In the closing minutes of Peaky Blinders episode one, Tommy received very concerning news from his wife Lizzie.

Lizzie and family were supposed to be flying out to join Tommy for Christmas, but the trip had to be cancelled due to daughter Ruby’s ill health.

In her sickness, young Ruby had been spouting Romany words and seeing visions of a man with green eyes.

The news visibly distressed Tommy, who cut short his trip and headed straight back to Birmingham.

He told Lizzie to keep Ruby safe and keep her away from her horses.

Does Ruby have the gift of sight like her great aunt Polly?

At the end of series six episode one, Tommy reached out to Polly talking to her as if she was in the room with him.

In chilling scenes, he said aloud: “Polly, they’re coming for me.”

What did you think of episode one of Peaky Blinders series 6? Leave us a comment on our Facebook page @EntertainmentDailyFix.