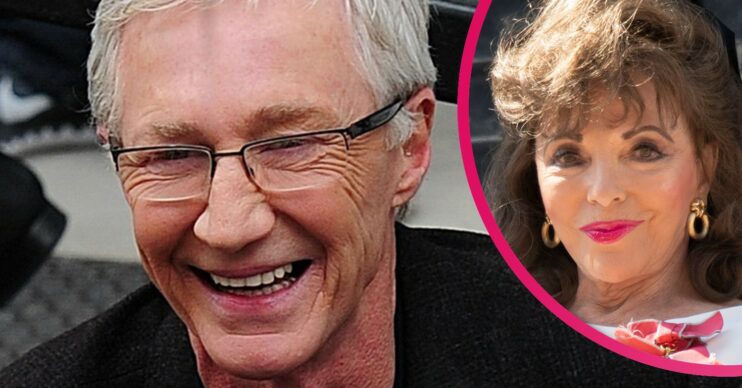 Paul O’Grady has sent his army of loyal fans absolutely wild after he teased an upcoming television series.

The For The Love of Dogs star, 66, says he’s currently filming a new show.

And it features none other than Dame Joan Collins – aged 88.

Taking to social media, Paul shared the exciting news with a snap with the ever glamorous Dame.

He captioned the snap with: “I’ve been filming a series for ITV with some wonderful guests. Here’s the legend that is Dame Joan Collins-,what a gal! #damejoancollins #itv.”

And dozens of fans shared their excitement about the new project.

One user wrote: “Ok, this is amazing news! I wish The Paul O Grady Show would come back at 5pm! I loved that show so much.”

Another user enthused: “Yes! More of you on TV … it’s what we need.”

A third user praised: “Great photo both of you looking so well.”

And a fourth user chimed in with: “Hope it’s on soon as always love the work you do. Hopefully one day you will do your Paul O’Grady show as l loved coming into the studio. Please be on TV now as football is driving me mad xx.”

So what is Paul O’Grady’s new show about?

As the title suggests it will air on Saturday evenings and feature various celebrity guests.

It will apparently combine both chat show and game show elements.

What’s more, it has even been described as “dirty” by Paul himself and is set to be quite a raunchy one.

According to The Sun, Paul was shocked that the series was commissioned after an apparently very rude pilot episode.

The Lily Savage star said: “This will never get to a series. It’s the dirtiest show that is possible on telly.

The show is expected to launch in the autumn of this year – but a premiere date has yet to be confirmed by ITV.

Paul has been presenting his popular series Paul O’Grady: For The Love of Dogs, set at Battersea Dogs and Cats Home, since 2012.

And last year he hosted a Kent-based travel show, Paul O’Grady’s Great British Escape, which was yet another hit with his fans.