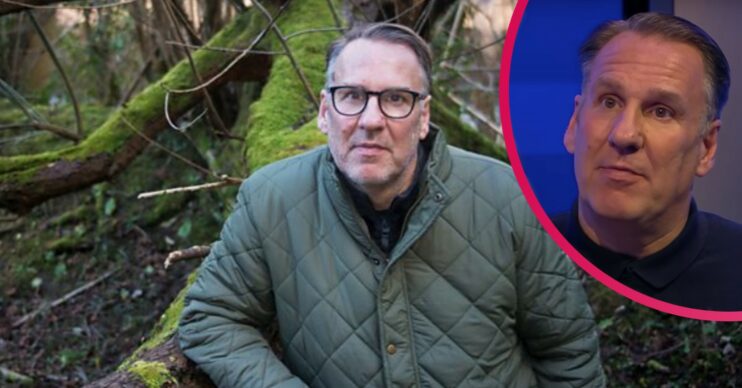 Paul Merson: A Walk Through My Life: The ex-footballer’s complicated love life explained

He's been married three times and has eight kids

The former footballer will be strolling across the North Yorkshire Moors as he opens up about mental heath, his battle with addiction and his road to recovery.

So who is the one-time Arsenal star and is he still married?

Here’s everything we know about Paul Merson.

Who is Paul Merson?

Paul Merson is a former professional footballer who played for England.

He is also a manager and sports television pundit for Sky Sports.

Originally a forward, Paul found success later on in his career as an attacking midfielder and playmaker.

Where does Paul Merson live now?

Paul Merson now lives with his wife Kate and their three children in rented accommodation in south-west London.

Paul has been married three times and has eight children.

His first marriage was in 1990 with childhood sweetheart Lorraine Costin.

However, their marriage crumbled after 10 years and three children – Sam, Charlie and Ben – together due to his drug addiction and alcoholism.

According to the Daily Star, Lorraine previously said: “He was my childhood sweetheart, I loved him.

“I never wanted my marriage to end, I never hated him, not once. I just felt helpless that I couldn’t help him any more. But you can’t help someone, you can only help yourself.

“I had just come to the end of being able to manage being with him. I had to look at my own life and where it was going and if it meant ending the marriage to him and I had to do it.”

Sadly, after their split, Lorraine turned to alcohol, struggling to cope with life as a single mum of three young boys.

Describing it as a “slippery slope”, she checked herself into rehab.

Eventually she kicked her addiction with the help of a coach, and has since trained as a life coach to help people also battling addiction.

Paul’s marriage to Louise saw the pair have twin girls – Maisie and Molly – before they decided to split.

Paul spent the night in the police cells after a row with Louise one over his gambling which saw her call the police.

He was released the next morning after being cautioned for assault.

At the time, she said: “It’s a shame for him. Like many people with an addictive personality, he is struggling to cope. At the moment he isn’t coping too well.”

Louise was said to be “gutted” when they split.

A pal claimed: “She has stood by Paul through thick and thin. But in the end their rows over his betting tore them apart.”

The former England star found love again with Kate with the pair tying the knot in 2016.

Keen to avoid the mistakes of his past, Kate now keeps control of the family’s money.

Paul himself recently revealed that his wife gives him an “allowance” after he gambled away their house deposit.

It happened during the first lockdown.

He told The Sun: “I lost it all. I lost everything. I didn’t tell Kate at first.

“For the next week or so, I used to look at the kids and I used to hate myself with a passion.

“I thought, I just want to kill myself. How did you do that, how could you take their security?”

How old is Paul Merson?

What is Paul Merson worth?

According to Idol Networth, Paul Merson is worth a whopping £10.5 million.

Who did Paul Merson play for?

Paul Merson is mainly known for playing for Arsenal football team, he was even ranked the 26th greatest Arsenal player of all time in 2008.

The former footballer originally joined the club as an apprentice in 1984.

He then made his debut for the Gunners on November 22 1986 against Manchester City.

The Arsenal star was also capped 21 times for the England national football team and represented the nation at 1992 UEFA European Championship and the 1998 FIFA World Cup.

In 1997 he then joined Middlesbrough until he sold to Aston Villa in 1998.

What does Paul Merson do now?

Paul Merson mainly works for Sky Sports where he is a match reporter and regular pundit for Gillette Soccer Saturday.

Paul Merson has openly spoken about his past battles with with gambling, alcoholism and drugs over the years.

The football pundit spoke further about his lockdown experience on Good Morning Britain last autumn. He said: “It is sad. In lockdown it was scary.

“You’re watching it and my brain was telling me I’ve saved enough money to get a deposit for a house, to get us out of rented accommodation.

“And watching the news… as an addict I have to keep watching stuff, and the news was blowing my mind.

“Addiction talks to you and it’s like: ‘We’re not getting out of this. We’ll be in lockdown forever, this is it. We need a house and the only way to do that is by chasing the money.’

Writing for the Daily Mail, Paul said: “I didn’t stop until, eventually, I’d lost everything I’d ever had – -close to £7 million, including houses, cars, marriages, my entire pension and my self respect.”

What is tonight’s how Paul Merson: A Walk Through My Life about?

Paul Merson: A Walk Through My Life will see the footballer head to Yorkshire.

Viewers will be given a bird’s eye view as he discusses his life, career and faith.

Carrying a 360-degree camera, he also describes his struggles with drink and gambling addiction.

Paul Merson: A Walk Through My Life airs on BBC Two tonight (May 5) at 8pm.