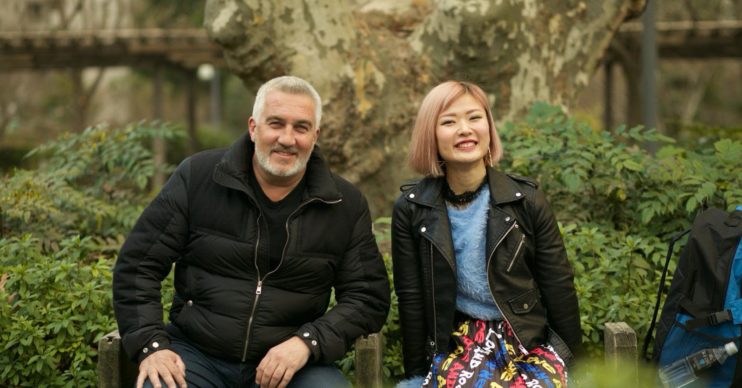 His comments about bread in Japan made many cringe

Paul Hollywood Eats Japan has left viewers divided after the baker made comments about bread in Japan.

The Great British Bake Off judge also got a world-renowned Michelin-starred Japanese raman chef to eat a Pot Noodle.

What is the concept of Paul Hollywood Eats Japan?

The show is billed as Paul travelling round the country finding out the importance of food in Japanese culture.

But he soon had fans hitting out after he commented: “Japan does make me nervous because it’s all rice and noodles, isn’t it?

Paul later stood in a Japanese bakery and marvelled at all the goods on offer, once again claiming he’d assumed Japan was just a “rice-based culture”.

The baker was also unable to use chopsticks. His guide, Kilara, told him to stop pointing with the eating implements because it was “rude”.

She was further unimpressed when he stabbed the food with the sticks, saying: “It’s childish. You’re like a five year old.”

Later in the show he swapped a beautifully created bowl of raman noodles by famous chef, Saito, for a Pot Noodle.

He also made a faux paus when he tried to open some tinned bread outside. It is bad etiquette to eat in the street.

Fans watching the show said Paul was ’embarrassing’ Britons and called him ‘ignorant’.

#paulhollywoodeatsjapan couldn’t think of a worse host for this program.

The guy comes across as a clueless crass tool.

Thinks he’s way cooler than he is. Needs to realise he’s a baker not a rock star

Should have picked someone like Richard Ayoade, Noel Fielding

And I was right about #paulhollywoodeatsjapan

“I thought all Japan had was rice and noodles”.

Probably the most ignorant show on Japan that I’ve ever watched!!! https://t.co/wRWE6Z8PgD

This is #paulhollywoodeatsjapan program is very condescending 🙄

On #paulhollywoodeatsjapan, Paul Hollywood said “When I was a trainee baker, they advertised for jobs in Japan but I didn’t apply because I didn’t think they ate bread.” Why would they advertise for bakers if they didn’t eat bread? What did he think the job involved? #stereotypes

Paul Hollywood making himself look like a neanderthal #paulhollywoodeatsjapan honestly ruining a really interesting programme with him constantly saying rice and noodles, all they eat are rice and noodles…. The land of rice and noodles. Yes Paul, we know. Move on 🤦🏼‍♂️ pic.twitter.com/2fzHdLp6YU

Amazing to think #PaulHollywood works in the food industry when he apparently has so little knowledge of noodles. And giving a Pot Noodle to a Michelin started chef is just an insult. #paulhollywoodeatsjapan pic.twitter.com/Btr7tOGlie

Watching #paulhollywoodeatsjapan and his ignorance is making me so angry. Embarrassed at how he’s compared Michelin ⭐️ ramen to pot noodle 😳 He should be embracing the culture to the max but instead looks like he doesn’t want to be there.

“As a Brit” #paulhollywoodeatsjapan doesn’t represent me. Cringing.

However, some thought the show was fun and felt enlightened by it.

The negative tweets are so annoying! The vast majority of the uk population would not know the cultural etiquette of Japan, so I for one found it educational and entertaining. Well done Paul and Kilara 👍 #paulhollywoodeatsjapan

Y’all hating on Mr Hollywood. Chill. I was not expecting to like it but actually thought it was great fun. He was very complimentary about most of the food and looked like he was having fun. Cheered me up. The KFC Xmas thing‼️ Worth it for that alone. 🎅🏻🍗#paulhollywoodeatsjapan

And I was right about #paulhollywoodeatsjapan

“I thought all Japan had was rice and noodles”.

Probably the most ignorant show on Japan that I’ve ever watched!!! https://t.co/wRWE6Z8PgD

How many episodes are there of Paul Hollywood Eats Japan?

This series has two more episodes left to screen.

Next week Paul will travel to Hiroshima where he’ll get a cookery lesson in one of the world’s smallest restaurants from a survivor of the atomic bomb.

He’ll also attend a rice festival and eat a buffet on a bullet train.

Paul Hollywood Eats Japan continues on Tuesday, May 5 at 9pm on Channel 4.