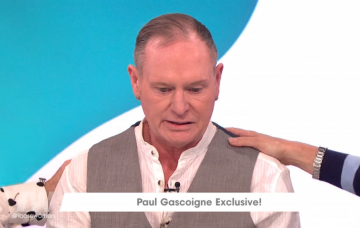 Footy legend Paul Gascoigne choked back tears and was comforted by members of the Loose Women panel earlier today as he spoke about his father’s death for the first time.

Initially joking about he had played in front of 100,000 fans without a second thought but was “petrified” about appearing alongside the daytime chat show’s hosts, Gazza’s nerves seemed to fray as he struggled to find the words to express himself about his dad John, who died in February.

But a healthier-looking Gazza also revealed his determination to beat the drink, and he explained how a darkly humorous warning from his father now serves as his inspiration to stay sober.

Both Linda Robson and Jane Moore reached out to comfort the recovering star, 50, as he spoke about the circumstances surrounding his last drink.

Looking down, Gazza revealed his most recent sip of alcohol was at the start of December before he entered rehab.

“My dad wasn’t well, I didn’t take that well because I’m really close to my dad,” he said, before briefly pausing to compose himself.

Gazza continued: “With my dad’s sense of humour, it was funny because I said to him: ‘Dad, you’re not going to pass away are you?’

Describing his shorter stints in rehab as ‘top ups’, Gazza – who has also suffered from addictions to laxatives and Red Bull – also noted: “I was going to go home for Christmas, but I decided to check myself in [to rehab] for a few weeks just to make sure I was OK.”

He added: “I thought, the way he was, and if he was going to pass away, a drink would never bring him back anyway. That’s what I was thinking all the time.”

The former England maestro also said how having a drink is a choice and he tries to take responsibility for that and either rings his sponsor or goes to a support meeting if he feels he may relapse.

As ever, Gazza managed to find some light among the darkness as he explained his cravings for children’s medicine Calpol, which contain minuscule traces of alcohol. He related how he would down 20 of at a time but was found owning up to his habit was cringe-inducing.

“I got addicted to Calpol,” he confirmed.

“What was embarrassing [was] when I went to rehab and people asked: ‘What you in for?’

“I said ‘Calpol’… and everyone started laughing!”

Thanks sooo much re your tweets I love the support I can’t thank u enough x😘 plus I give myself a gee up this morning I went out at 6.30am in the snow giving the homeless cigs and money&wishing them love&hope 😢😘❤xx

Read more: Linda Robson gets Ant McPartlin’s name wrong as she reveals he walked in on her ‘half-dressed’

What did you make of Gazza’s comments? Let us know by commenting on our Facebook page @EntertainmentDailyFix.