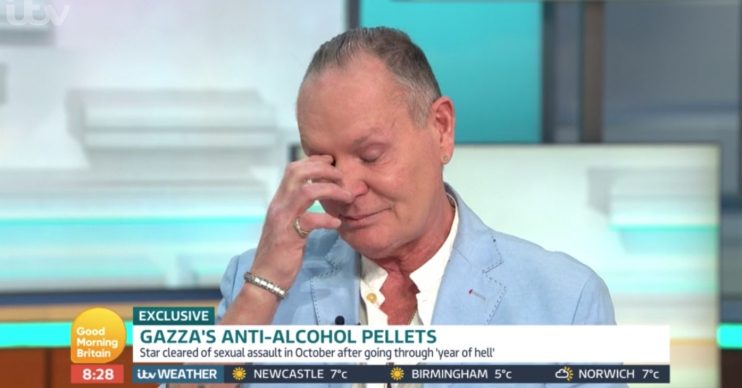 Paul, 52, got emotional when he began to speak about press intrusion into his life and the support he gets from his fans.

Read more: Gazza slaps down viewers claiming he was drunk on live TV

Gazza was on the show to discuss how he had spent £20,000 on having anti-alcohol pellets inserted into his groin.

The star, who has battled addiction to booze and drugs since he hung up his boots, told hosts Piers Morgan and Susanna Reid that the pellets make him feel sick every time he has a drink.

He admitted that he still has the ‘odd glass of wine or the odd beer’.

[The pellets] mean you can have a beer or a glass of wine and socialise, but you cannot have any more.

“[The pellets] mean you can have a beer or a glass of wine and socialise, but you cannot have any more.

“There’s been long spells when I don’t drink. Being an alcoholic there’s sometimes you just want to get smashed.”

Paul endured a tough 2019, when he was accused of sexually assaulting a woman on a train in August.

A court found him not guilty, and now the star says he’s ‘happy in life’.

Read more: Paul Gascoigne struggles to contain his emotions as he discusses father’s death for the first time

Conversation soon turned to media coverage of his life.

He said some of the stories were written about him were ‘lies’, and was then asked if he had any sympathy for Prince Harry about the fact that he wanted a quiet life.

“Whenever I open the door, I can never get away from Gazza,” he said, referring to his larger-than-life personality.

He went onto say that he loved the public because they were supportive, and that’s when Paul broke down.