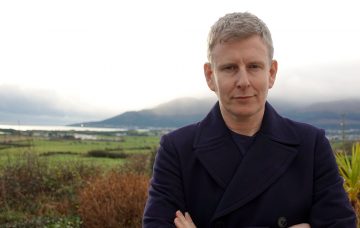 Patrick Kielty: “I can’t forgive my dad’s killers but we have to move on.”

Patrick Kielty has spoken movingly of how he can never forgive the hooded gunmen who murdered his father when he was just 16.

But he says that, while he won’t “hug them”,  he is pleased the killers were released as part of the Good Friday Agreement because it made peace possible in Northern Ireland.

The comedian has revisited his homeland to meet others caught up in the sectarian Troubles for a new BBC1 documentary on tonight.

In it, Patrick recalls: “I was in school and I was asked to go to the headmaster’s office. They said, ‘Your dad’s been shot’.

“I remember saying almost immediately, ‘Is he dead?’, and they said, ‘Yes’.

“Everything about it felt like you were going through it but it wasn’t real. There’s a report about the man who’s been killed, they’re mentioning my dad’s name.

“Nothing prepares you for the numbness you feel when you go through it.

“There was someone from the village who was involved, someone who knew him and who met him and had decided he was next.

“I find that strange even after all this time. My dad wasn’t involved in politics but he was a well-known Catholic and an easy target.”

They were released as part of the Good Friday Agreement, which Patrick himself voted in favour of, that saw hundreds of convicted killers set free from jail.

The comedian, who is married to TV presenter Cat Deeley, also revealed that the IRA sought to recruit him after the fatal shooting.

“At the time of my dad’s death there were thousands of armed paramilitaries and it would have been easy for me to pick up a gun myself,” he said.

“My dad’s brother had been approached in the graveyard by the IRA who said to him, ‘We could probably use a couple of good, smart, strong, strapping lads like those Kielty lads if they’re interested in revenge’.

“They were told in no uncertain terms where to go, but you can see how people’s pain is channelled into causing somebody else’s pain.

“Everybody wants to believe that the people they loved died for something. My dad died for nothing.

“He wasn’t a political figure, he wasn’t taking a stand, he had a building firm.

“I can’t forgive them for what they did, but whether or not these people are in jail, it isn’t going to bring my dad back.”

He said of the Good Friday Agreement: “I felt this is what has to happen to stop this happening to someone else. ‘Okay, I’ll suck it up’.

“I remember at the time thinking, ‘If this can bring peace, we’ve got to do this’.”

“When you know that your dad was an innocent man, my dad was innocent, I think that perhaps you get through it.

“I think it’s great that they all got out of jail because we have to move on.