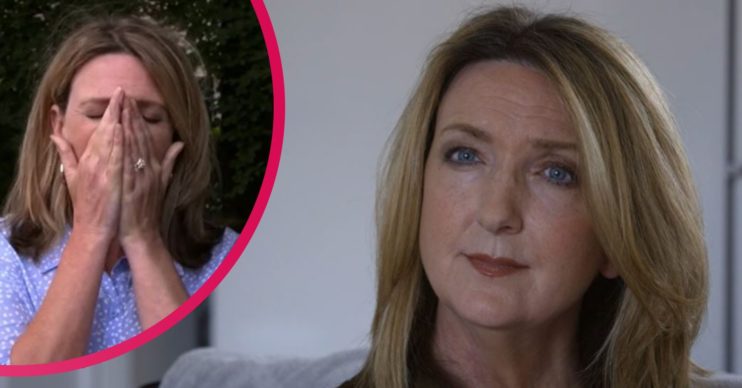 Victoria Derbyshire has been praised by viewers after her ‘horrifying’ Panorama documentary about domestic abuse aired on BBC One.

Escaping My Abuser, shown last night (Monday, August 17), saw the newsreader explore the impact of the coronavirus lockdown on those living with an abusive partner.

The Loose Women favourite met with some of those who managed to escape their abusers at the height of the coronavirus crisis.

At one point, she travelled to a refuge in Wales for women who’ve fled domestic violence.

She asked where they would be, if not for the refuge. Many told her, “I’d probably be dead”, while one said, “He would’ve either killed me or I’d have killed myself”.

Read more: Victoria Derbyshire breaks down on Panorama as she recalls violent dad beating her mum

One of the women, all of whom spoke anonymously, told Victoria: “He kidnapped me, beat me, then he kept me from going home and seeing my family and stuff.”

The abuse victim broke down crying as she added: “For 10 days he held me against my will. I’m happier [here], loads happier.”

Another spoke of her harrowing ordeal during the lockdown.

She said: “I was at home with him. We were both listening to Boris Johnson., and he looked over at me, he had his arms folded. He looked at me and said, ‘Let the games begin’.

“And he said, ‘If you think it was bad before, with the rape, you’re in for a rough ride’.

Thank you, difficult but important.

“So the rape started really, really, really bad. Curtains would get closed, TV would be up loud, front door would be locked, music would be turned up so no one could hear me screaming for someone.”

Victoria, stunned, asked how may times she was raped during lockdown. The woman told her: “Hundred, easy. If not more.”

She went on to explain how her partner gave her internal injuries by beating her. The man also used cigarettes to burn her.

Read more: BBC hits back in defence of Victoria Derbyshire after viewers brand her disrespectful

Elsewhere in the programme, Victoria spoke of her own experiences with domestic abuse, as he father was violent.

She said, fighting back tears as she stood outside her childhood house in Lancashire: “I’ve got some really happy memories of being there. But there were some really difficult times because my father was violent.

“I remember once he locked my mum in their bedroom and he was hitting her. There was loads of noise and I was scared, so I ran from here down to the police station. I was 12 or 13.”

On Twitter, viewers thanked Victoria for shedding light on such a serious issue.

One said: “Stunning from @vicderbyshire in @BBCPanorama #escapingmyabuser. Police record 85,000 #domesticabuse calls. And separately, 11 women, two children and one man killed in alleged domestic abuse situations in the first three weeks of #lockdown. This has to end. All involved, thank you for sharing.”

Another wrote, with a broken heart emoji: “Thank you, difficult but important. #escapingmyabuser #BBCPanorama @vicderbyshire #bravery.”

A third said: “Just watched #EscapingMyAbuser. At times I was holding my breath. Powerful, emotional and horrifying. @vicderbyshire another stellar piece. Sad and angry but also inspired seeing those who help the victims. #BBCPanorama #domesticabuse #DomesticViolence.”

Stunning from @vicderbyshire in @BBCPanorama #escapingmyabuser. Police record 85 thou #domesticabuse calls and separately 11 women, 2 children & 1 man killed in alleged domestic abuse situations in the first 3 wks of #lockdown. This has to end. All involved thank you for sharing

Just watched #EscapingMyAbuser. At times I was holding my breath. Powerful, emotional and horrifying. @vicderbyshire another stellar piece. Sad and angry but also inspired seeing those who help the victims.#BBCPanorama #domesticabuse #DomesticViolence