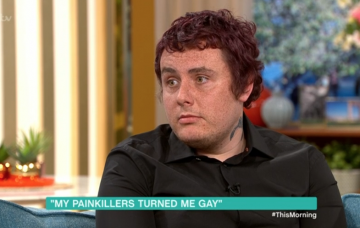 “Painkillers made me gay!” Viewers slam “deluded” This Morning guest

A man has been branded “deluded” and a “fame-seeker” after claiming he has become gay from taking painkillers.

Scott Purdy, 23, said on ITV’s This Morning his sexuality changed when he started taking Pregablin for a broken foot suffered in a go-karting accident.

Viewers reacted with a mix of hilarity, scorn and anger at the astonishing suggestion — and the show’s resident medic Dr Ranj, who is also gay, dismissed it, telling him: “I’ve been on Pregablin myself. I’m sorry to say it didn’t make me gayer.”

Scott insisted that before he was hospitalised for a month with the injury, he was straight and enjoyed dating women.

He said he lost his sexual attraction to women and broke up with his girlfriend when a GP prescribed the medication earlier this year, just days before Scott realised he was suddenly attracted to men.

Read more: This Morning viewers disgusted by mum who says she has a favourite of her four children

“I broke my foot in 2012 and, up until this year, I was taking codeine and tramadol, but they started to make me feel sick,” he said.

“So that’s when they prescribed me Pregablin and I’ve been taking that since early February.”

Scott told hosts Phillip Schofield and Holly Willoughby he started finding men attractive just four or five days after starting the pills and began to distance himself from his then girlfriend.

“I started giving her fewer cuddles, less attention, and all I craved and wanted was male attention.

“I stopped all medication and as soon as that happened, my sexual attraction towards my girlfriend went back up.

“But the pain started building up in my foot, so I started taking my painkillers again.

“I’m really happy now. The fear is if I stop taking it, I’ll go back to what I was, but I don’t want to do that.

“I had no desires for men. It happened so recently and so out of the blue.”

Asked if painkillers could turn someone gay, Dr Ranj said: “In very simple terms I’m going to say no.”

He said one side-effect of Pregablin was that it could change a person’s sexual desire but not which sex they found attractive.

Dr Ranj told Scott: “What it probably does is allow you to express what was already there.  That’s my professional opinion.

“All it has done is allow you to be your true self. This has given you permission to be who you are.”

Viewers overwhelmingly rejected Scott’s claims and branded him an “insult to gay people”.

One posted on Twitter: “‘My painkillers turned me gay’ is just insulting. Dont give attention seeking deluded [bleeps] like this the time of day.”

Another said: “This is the most ridiculous thing I have heard. You can’t choose to be gay or turn gay. It’s who you are. You’re born that way. Nothing more to be said.”

i can’t even!! Tablets do not turn you gay!! just admit you were too scared to come out rather than placing the blame! #ThisMorning

Surely this is offensive to gay people #ThisMorning

#ThisMorning Talk about a coming out story! Is this guy not just proud to admit he was always gay, there isn’t such thing as a magic pill

“Painkillers turned me gay” what an absolute moron, You were gay and were embarrassed about it so you wouldn’t accept it now you have #ThisMorning

How the heck can painkillers turn you gay? Feel like he’s done this for 5 mins of fame #ThisMorning

@thismorning @Schofe @hollywills … this guy who “turned gay” after taking painkillers. It’s comedy gold. What a deluded tool!
Thanks for giving me a laugh today! #ThisMorning

Coming from a member of the LGBT community, it’s clear to see that this guy on #ThisMorning has always been gay but was in denial until he decided to blame these painkillers. It totally depreciates the pain LGBT members have to go through in order to come out. It’s not medical

‘My painkillers turned me gay’ honestly I’ve heard it all now! #thismorning

By this logic…would it turn gays l straight…..what a load of tosh! My tramadol didn’t turn me to a trans zombie like I thought…. #thismorning

“My painkillers made me gay” erm… ok then. #wtf #thismorning

I don’t believe that guys painkillers turned him gay whatsoever maybe he was gay the whole time who knows? #ThisMorning

What do you make of Scott’s claims? Leave us a comment on our Facebook page @EntertainmentDailyFix and let us know what you think!