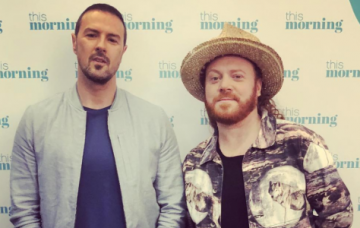 Paddy McGuinness will replace Fearne Cotton as the new team captain on Celebrity Juice, it has been confirmed.

Stacey Solomon has also been unveiled as a new team member and series regular on the ITV2 comedy panel show.

It is the second new TV role in four months for Take Me Out presenter Paddy, who in October was unveiled as the new co-host of Top Gear alongside Freddie Flintoff.

The show is hosted by his close friend and colleague Leigh Francis – in his guise as Keith Lemon – and sees Holly Willoughby as the other team captain.

Paddy is replacing Fearne, who announced her departure in December following 10 years on the programme, which puts celebrities to the test with a range of games, stunts and challenges.

Paddy said: “I was a guest on the first-ever episode and I’ve done every series since, so I’ve always felt like part of the Juice family.

“Keith’s one of my best mates, I love Holly and we all have a natural rapport. I’m looking forward to the chaos!”

Loose Women star Stacey will be on Paddy’s team on the series, which returns in March.

She said: “I’m so bloomin’ excited to be joining the Juice family. I have loved the show since it began and always enjoyed being a guest, so to get to be part of the furniture is a dream come true. So here goes nothing. Wahoo.”

Other star panellists due to take part across the new series include Amanda Holden, Emily Atack, Will Mellor and Johnny Vegas.

“All we can predict is unpredictability as they take their seats for the new series. Bring it on!”

What do you think of the hires? Leave us a comment on our Facebook page @EntertainmentDailyFix and let us know what you think.