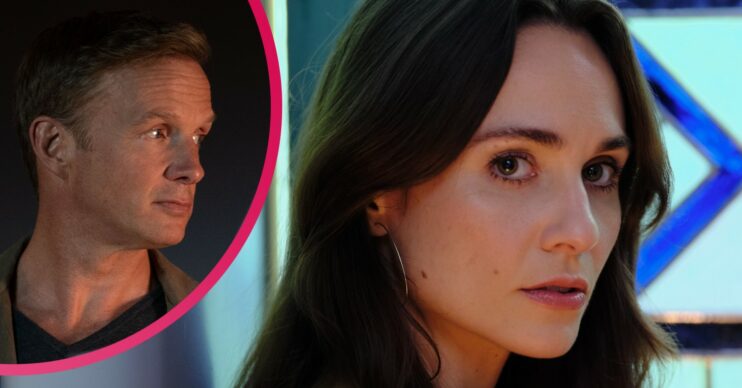 Our House episode three on ITV: Has Bram double-crossed Toby? And other pressing questions!

The twists keep on coming!

Our House on ITV is proving to be our favourite thriller of 2022 so far – and episode three kept the jaw-dropping revelations coming thick and fast.

The third part of the series revealed that Toby was actually Mike, and had been working with Wendy all along.

They blackmailed Bram into selling his house and transferring the money to their account, in exchange for their silence about his part in the hit-and-run.

And HOW good is Buket Komur, who plays Wendy in the cast of Our House?

We absolutely hate her, which means the actress is doing her job so well!

Here are the burning questions we want answered as the series draws to a close.

***Warning: spoilers from episode three of Our House ahead***

During episode three of Our House, it became clear that even Toby/Mike and Wendy didn’t know where Bram was.

Nor did they know where the money was.

Did we imagine it, or was there a scene where Bram (Martin Compston) was at an airport?

It was a blink-and-you’ll-miss-it moment, but the first time we’ve seen Bram since he sold the house.

We now know that is WAS Bram and Wendy who sold the house from under Fi’s feet.

But has he double-crossed them, and kept the money?

If so, will he be back for his wife and kids?

He said he loved Fi, and we believed him.

We wouldn’t believe a plot where he stitched up his family.

Would Bram REALLY sell the house after being blackmailed?

Would Bram really consider losing £2million AND his wife AND his kids AND his job AND his mum to avoid going to jail?

Surely prison and probable release in a few years would have been preferable to fleeing his old life?

During episode three, Bram was genuinely devastated about the fate of the eight-year-old girl.

After being unresponsive in a coma, she died – and Bram released the horrible truth that he’d have to live with her death on his conscience for the rest of his life.

He’s a dad of two himself, and his boys are a similar age.

Yes, Bram should be punished for what he did, but surely telling the police would be better than appeasing the blackmailers?

Unless he had a better plan all along…

Read more: Martin Compston distracts viewers as he promotes new series Our House on This Morning

Our House ITV episode three: Where is Bram and does he have the money?

He’s vanished, and his phone is disconnected.

Has he disappeared on a jet to start a new life with £2million in his pocket?

We don’t think so…

Is he in hiding somewhere with the money, waiting to exact his revenge?

Or could he even be in jail already, having confessed his crimes?

Outside bets being taken on him being in the garden shed drinking his sorrows away.

Can Bram be redeemed?

Yes, he’s behaved like a plonker in his marriage.

And the hit-and-run was unforgivable.

He should be punished.

The only way Bram can be redeemed is if he admits the truth to the police, serves time in jail, and donates the profits from the house to the family of the victim.

Our House ITV episode three: Does Fi love the house more than Bram and the kids?

Is it just us, or is Fi’s obsession with the house a tad unhealthy?

She refuses to sell it, even though it seems like the most obvious answer to their financial bind.

When Bram even suggested getting it valued, she lost her cool.

But surely keeping it AND a flat isn’t a viable long-term solution?

Does Fi need a reality check?

How the HELL did she not realise Toby was too good to be true?

Especially when he feigned a bulging bladder so he could use her loo and have a snoop around the house!

At the end of episode three, he lets slip something he shouldn’t have.

He mentioned Bram’s previous infidelity – something that Bram told Wendy, but Fi had NOT told Toby.

What has Toby/Mike been in prison for?

Toby/Mike told Bram he’d been in prison before – and that, no surprises here, it’s pretty grim.

But what was he in jail for?

Is he more dangerous than he looks?

What do you think of Our House so far? Leave us a comment on our Facebook page @EntertainmentDailyFix.