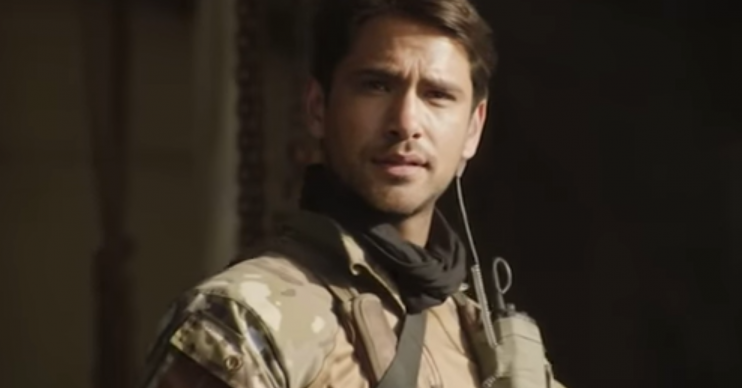 Viewers are clinging to the theory that Luke Pasqualino will return

But the death of Fingers has led some fans to believe it means Elvis is actually alive.

In fact, they’re convinced the show dropped a huge hint in the series’ fourth episode on Tuesday (April 14) when Georgie Lane made a confession.

Read more: Our Girl – who is Cheese?

After the funeral of her colleague and brother-in-law, Georgie was sitting with Kingy talking about how unfair everything was.

Georgie Lane makes a confession about Elvis in Our Girl

After confessing she missed Elvis and felt hollow ever since he’d gone, she revealed she thinks he could be alive.

“Sometimes I wonder whether he’s alive and all this is just a sign. I know it’s crazy.

I didn’t even check his pulse.

Fans who are ever hopeful Georgie and Elvis will be reunited immediately locked on to the out-of-the-blue mention and tweeted their theory.

Wonder if Omar has Elvis and that’s what their all discussing as a deal on how to get Elvis back. Kingy never said anything about Georgie not checking his pulse or when she said she feels like he’s still alive. Makes sense on why the special forces haven’t killed Omar #ourgirl

don’t know whether I’m thinking into it too much here but what if Georgie saying she didn’t check Elvis’ pulse means they’re hinting he’s still alive-it seems a bit random otherwise?? She might kill Omar then find out Elvis is still alive and his death was a cover up? #OurGirl

It’s highly unlikely that Elvis is alive but it was rather an odd statement that Georgie made about his pulse. Very unusual to introduce something that doesn’t mean anything #OurGirl

okay, but what if elvis is still alive and serving in afghanistan,, heat me out. georgie said she never checked his pulse. i also don’t remember seeing a funeral. there was also a picture from one of the recent episodes that looked exactly like elvis 🙃 #OurGirl

How did Elvis die?

Elvis was killed at the end of series three after a bomb was detonated remotely when the team were ambushed.

Georgie tried to revive him, but it was too late.

Fans were left heartbroken by the death and have spent a lot of time coming up with theories he is actually alive.

One person who is definitely gone though is the popular Fingers.

The drama broke everyone’s hearts when he died after being shot.

2-Section had come under attack the previous episode and Fingers had been gravely injured.

When the Taliban then blocked their truck, their hopes of getting to the hospital in time faded and Fingers left Marie a voicemail saying goodbye.

Georgie was determined not to give up, though, and she fought to save him.

Although they eventually got him to the hospital alive, he lost his life, and Georgie was left distraught once again.