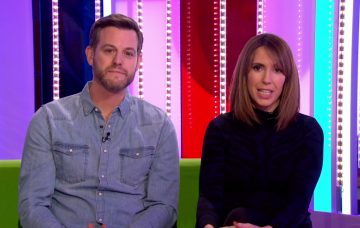 Alex is expecting her second child

The One Show’s Alex Jones is reportedly set to be replaced by Oti Mabuse when she goes on maternity leave.

Strictly Come Dancing star Oti, 28, has revealed that she was approached by BBC bosses about taking over from Alex, 41, in May, when the star has her second child.

She told The Sun: “They said to me, ‘How would you feel about working on The One Show?’ And I thought they initially meant somewhere behind the camera. They were like, ‘No, to present!’

“Before they had even finished the sentence I said, ‘Yes, whatever you want! Yes, don’t worry, I will make it work!’ They left the room and I dropped to the floor and screamed at the top of my voice.”

Oti is reportedly set to present an episode of the show in March and bosses will then decide whether to replace Alex with her from May.

Ent Daily has contacted The One Show for comment.

Alex – who gave birth to her first child, son Teddy, with husband Charlie Thomson in January 2017 – announced on The One Show in December that she is pregnant again.

The star previously admitted she returned to the topic magazine programme just three months after she gave birth to Teddy, now 22 months, because she was worried that bosses would find her a permanent replacement if she didn’t.

She said during an appearance on Lorraine last year: “I think women find it hard to be able to admit that they want to go back to work and that they are going to go back a bit earlier than everyone thinks is acceptable.

“It’s OK to say I like my job and I want to continue doing it while I’m a mother. You’ve worked very hard to get where you are. Anyone who respects their job, they are scared about someone stepping in and doing it better. It is a worry.

“People expect you to say the baby is the most important, and of course it is, but side-by-side you still want to be the same person you were before. You’ll never be exactly the same, of course. I think it’s OK to say, ‘Yes I’m going to go back to work’. ”

Alex wished she had waited at least five months before going back because it would have given her more time to bond with her baby.

She explained: “I went back a bit too soon.

Read more: The One Show viewers shocked by guest’s disgusting comment about husband

“Before you have a baby you don’t really understand how it’s going to change you. I made promises that were a sort of unrealistic. Three and a half months was very early.

“But we made it work. In hindsight, five and a half months would have been better. But you don’t know before going off on maternity.”