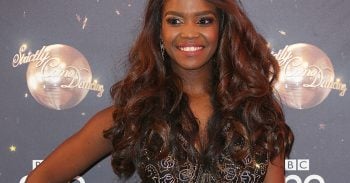 She thinks it's a "big deal" for whoever gets the job

Dancer Oti Mabuse has confessed why she wouldn’t want to replace Darcey Bussell as a judge on Strictly Come Dancing.

The Strictly pro, who has been on the show since 2015, has explained why the much-coveted role is not for her.

Oti opened up about staying in the job she loves so much, following the speculation that she is in the running for Darcey’s old seat.

Oti told Hello! magazine: “I love being a dancer and I enjoy creating and choreographing and I think I love that part more.”

The 28-year-old added that having a judging title brings huge responsibility and pressure.

“Strictly is the biggest show on television so it’s a big deal for anyone who gets it. They need to know what they are doing,” she said.

“What she brought to Strictly was so special,” Oti added. “Her replacement has to be completely different from what we have had, but someone who has the nurturing nature of Darcey.”

Former ballerina Darcey announced her departure from the BBC show at the start of April, after seven series.

Oti was previously high on the bookies’ list of strong contenders for the Strictly panel.

The dancer has already proved she has what it takes to be a talent show judge.

She made her debut as a dance ‘mentor’ on the panel of The Greatest Dancer earlier this year, alongside Cheryl and Glee’s Matthew Morrisson.

With the new series of Strictly just months away, talks are ongoing about who will be the fourth judge to join Craig Revel Horwood, Bruno Tonioli and Shirley Ballas.