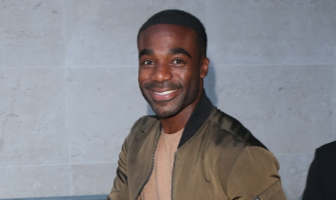 He's issued a warning to anyone who comes across it!

Ore Oduba has announced that his Strictly Come Dancing trophy has taken “pride of place” – in the guest toilet.

The presenter, 32, won the coveted glitterball when he competed on the BBC dance competition in 2016.

He posted a message on social media saying that for the first time he now has a guest loo so has installed the trophy there – and warned that anyone who mistreated it would be booted out “without so much as a wipe”.

Read more: Phillip Schofield “freaked out” by new This Morning studio – with a twist!

Sharing a picture of the gong on a shelf alongside a roll of toilet paper, Ore wrote on Twitter: “For the first time in our adult lives, WE HAVE A GUEST LOO !!!

“Finally, can put this to good use…. *note to all guests, any misuse and you’ll be out without so much as a wipe!”

Ore and his wife Portia moved into their new home over the weekend.

The television presenter shared two photos – one showing the couple and baby son Roman saying goodbye to their old house, and another showing them all smiles as they settled into the new digs.

He told fans: “Who doesn’t LOVE moving 😳😫🤯 goodbye old home, hello new house… (let’s forget the bit and small town’s worth of boxes in between!!!) at least we’re IN and thinking about all the memories we’ll make with our boy 😌.

At the time, Ore gushed: “Cannot find the words to describe this feeling… Just thank you God for our little blessing. His mum is simply my hero. 09.01.18 the best day in our tiny family’s life. Roman, you are our world… and the world is all yours.”

It’s been a busy year for Ore who not only became a first-time dad, but also took part in the Strictly live tour at the start of the year.

He’s also guest presented This Morning and They’re Off… For Sports Relief, as well as filming a brand new BBC daytime game show called Hardball, which will see contestants battling against the clock to beat a rolling ball.

Who is your favourite Strictly contestant of all time? Leave us a comment on our Facebook page @EntertainmentDailyFix and let us know what you think!