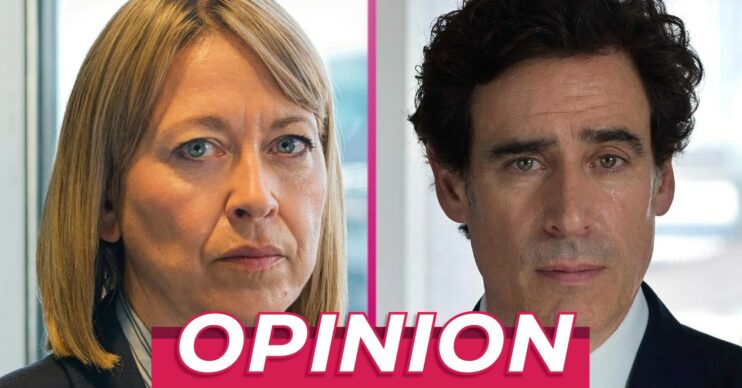 OPINION: Why the last episode of The Split on BBC One got it SO wrong

Were you as upset as we were?

The Split has aired its last ever episode and, if you were a big fan of the BBC One drama like me, you’ll be bereft at its ending.

After four years of living as a fly-on-the-wall of the Defoe family home, I felt like I knew them.

Let’s face it – I WANTED to know them.

And by that I mean that they are complex, flawed and can sometimes make really stupid mistakes JUST LIKE US!

Forget the unbelievable gloss of series like Anatomy of a Scandal, which failed to deliver, and the laughably implausible Killing Eve…

The Split felt real, with characters I’d want to go down the pub with.

So why do I feel so let down by The Split ending on BBC One?

***Warning: spoilers from The Split series three ending ahead***

Did Hannah and Nathan end up together?

The final ever episode of The Split is bittersweet and doesn’t deliver the happy ending I wanted.

Am I alone in feeling cheated?

Hannah and Nathan went ahead with their divorce, agreeing to dispense with the heavyweight lawyers and do it amicably instead.

After several episodes of wanting Nathan back, Hannah finally realised that their marriage was “broken” for good.

Nathan continued his new life – albeit reluctantly – with his new plant-loving girlfriend Kate.

And Hannah told Christie she was prepared to be with him, but only on her terms and in the UK, not in the States.

Why The Split ending on BBC One got it all wrong!

Damn it, I wanted Hannah and Nathan to stay together!

To hell with Kate and her unborn baby, we knew she’d be alright without Nathan.

I just didn’t care enough about her – she seemed too perfect.

And seeing her with Nathan just felt SO wrong.

Nathan and Hannah – Hathan/Nannah? – were flawed but I still had hope.

Call me a silly romantic, but I wanted a happy ending.

And to me, that was Hannah and Nathan together, not apart.

Yes, I know couples divorce in real life all the time.

In fact, nearly half – 42 per cent – of all marriages in the UK end in divorce.

But isn’t real life grim enough at the moment?

What with Covid, the war in Ukraine, and whatever is going on with party politics this week [insert latest scandal here], I needed an injection of love straight into my heart.

Instead, I felt robbed.

Should Hannah and Nathan have stayed together….?

He cheated, she cheated, yes it was a mess at times.

But, throughout it all, they loved each other.

I know the clue is in the title – The Split – but I really wanted them to tear up the divorce papers and live happily ever after.

I could have gladly watched them grow old together until the end of time – theirs or mine.

I was totally invested in their relationship.

That’s testament, of course, to the scriptwriters and the likeable performances from Nicola Walker as Hannah, and Stephen Mangan as Nathan.

And if I have to imagine them, I’ll always picture them together.

Does Hannah end up with Christie in The Split ending on BBC One?

A large part of the reason I didn’t want Hannah and Nathan to split up was Christie.

Did anyone else find him horribly creepy?

We did NOT want Hannah to end up with him and his ego.

Luckily, Hannah and Christie didn’t end up together at the end of The Split.

Although the door was left open.

Hannah told Christie she didn’t want to leave her kids and start a new life with him in New York.

But she said he could return to the UK and progress from there.

We’ll never know if Christie makes the decision to be with Hannah.

However, we think Hannah is way better off without him!

Showrunner Abi Morgan recently hinted that fans may one day see more from the Defoe women.

She teased that there could be a spin-off coming up for us to look forward to.

Speaking to Radio Times, she said of a possible spin-off: “Watch this space, I’m sure there’ll be news about that very soon.

“There are just more stories to be told. So fingers crossed.”

Nathan and Hannah reunion anyone?

All three series of The Split are available to watch on BBC iPlayer.

What did you think of the ending of The Split on BBC One? Leave us a comment on our Facebook page @EntertainmentDailyFix.