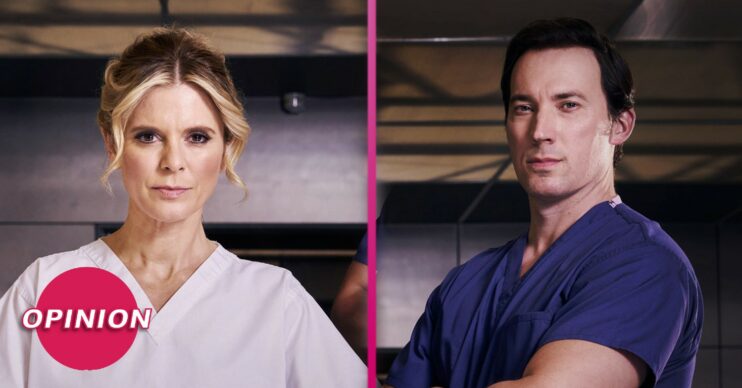 Don't do it Nikki and Jack!

Silent Witness pair Nikki and Jack could answer an age-old question tonight (Tuesday October 5) – after years of will-they-won’t-they sexual tension will they finally get it on?

And while may rejoice at the sight of the forensic pathologists potentially getting it on, I can’t help thinking it’s a bad idea.

Why? Read on for more.

Silent Witness: Will Nikki and Jack ever get together?

Over the years – in fact ever since TV drama existed – screenwriters have delighted in giving us will-they-won’t-they relationships.

You know the sorts. A couple bicker like an old married couple and initially dislike each other or rub each other the wrong way.

But, slowly but surely, they begin the bond and develop ‘feelings for each other’.

Until the inevitable happens and they end up falling into bed together because they just can’t hold themselves back any longer.

TV dramas and comedies have been littered with these will-they-won’t-theys. And they’re always a winner, let’s face it.

Remember when Ross and Rachel in Friends? They were a will-they-won’t-they and then an on-and-off for a decade.

And then there was Nessa and Smithy in Gavin And Stacey, and going back further Tim and Dawn in The Office and Mulder and Scully in The X-Files.

If you go back even further, you might remember Maddie and David in Moonlighting in the 1980s, surely the absolute dons of the will-they-won’t-theys.

And yes, when we as viewers emotionally invest in series for a number of years and the tension between two people is ramped up until we can stand it no more, there’s a sense of relief when they finally get together.

What’s the problem with relationships like Nikki and Jack in Silent Witness?

Many of these relationships – when characters do finally get together – often end up in disappointment.

And that’s when the writers are suddenly backed into a corner they can’t get out of.

How many times have we seen a pair of bickering ‘oh get a room’ characters get together for them only to split up months later?

Read more: Silent Witness fans are desperate for Nikki and Jack to get together… but will it ever happen?

Suddenly we’re back to square one and the whole cycle starts again.

On top of all that, seeing two characters – especially work colleagues – hurtle towards an oh-so-inevitable romance is predictable and a bit of a cliche these days.

How about they don’t fall into each other’s arms for a change? That would be far braver and bolder in terms of drama.

So hurrah for Nikki and Jack finally locking lips – but be careful what you wish for.