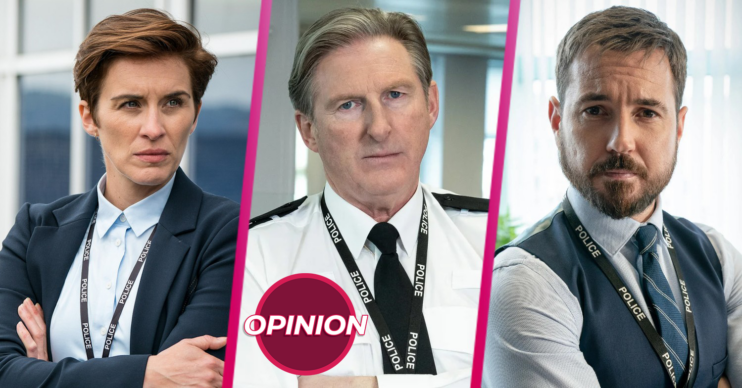 OPINION: Why are the Line of Duty stars teasing season 7? It’s time to stop flogging a dead horse

After THAT ending, we've had enough

Line of Duty won big at the NTAs last night (September 9), but why are the stars insistent on teasing season 7?

If you ask me, and millions of others after that series 6 ending, it’s like flogging a dead horse.

Quit while you’re (kind of) ahead, Jed Mercurio.

I say it with a heavy heart having been an avid viewer from the start, but it’s time to retire the show and those oh-so-familiar AC-12 faces.

I’ll miss ya Steve Arnott, but at least we have Vigil.

Just kidding, you only last eight minutes in that!

What did the Line of Duty stars say about season 7?

Read more: OPINION – Holly and Phil kissing at the NTAs and maintaining social distance on screen is just ridiculous

“This means so much. We started as a wee show on Wednesday night on BBC Two and now we’re the biggest drama on TV and it’s all because of the fans, we owe everything to you.

“We genuinely don’t take this for granted and who knows, maybe we’ll be back again.”

He appeared via video link and told viewers: “Who knows, we might be back.”

Now, I might get crucified for saying it, but I sincerely hope Line of Duty is done now.

Series six hit record-high viewing figures and became one of the BBC’s most watched dramas of the past 20 years.

After that cop out (pun intended) of an ending, though, just where will they go next?

It looks as if Hastings has been retired, Kate Fleming jumped ship early on in the series and even my beloved Steve was looking for a new job.

All the villains are dead and we know who H or the Fourth Man was.

To bring the show back just reeks of flogging a dead horse to me – and many viewers feel the same if you take a look at Twitter.

In fact, I did just that last night after the comments at the NTAs and some pointed out that if voting for the ceremony had taken place after the series 6 finale aired, Line of Duty would’ve gone home empty handed.

And I have to say it’s a sentiment I agree with. I was left entirely underwhelmed.

Will Jed bring Line of Duty back to appease viewers?

However, some pointed out that perhaps the series should return – for one pretty justifiable reason.

“Yes please,” said one after Martin’s comments about a potential return.

“Because I still haven’t forgiven you for that ending.”

So could Jed bring it back to make it up to disgruntled viewers or will he stick to his guns and leave things as they are?

One things for sure, when all is said and done, if it does return I won’t be able to resist tuning in.