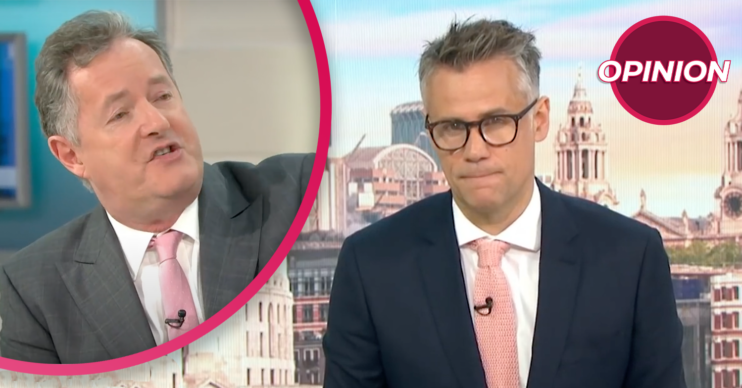 OPINION: We want Bacon for breakfast! Why Richard is just right to replace Piers Morgan on GMB

What's breakfast without a bit of Bacon?

Richard Bacon hosting GMB this week has got us thinking… The show just ain’t like it used to be, is it?

A year ago, legions of viewers were falling over themselves to switch on the ITV morning show to witness the spectacle that was rotweiller journo Piers Morgan tearing meaty strips off the most stupid of politicians.

The former tabloid editor’s power and ability to leave MPs a quivering wreck and overturn insanely dumb Government policy was so impressive that many viewers called for him to push Humpty Dumpty (oops, I mean Boris Johnson) off the wall and take control of the runaway train the United Kingdom had become.

Sadly, however, his utter contempt for Meghan Markle and his constant attacks on her authenticity ultimately led to his departure.

And, as you’ll have doubtless heard, Piers finally walked out of the show and took the viewers with him.

Since that fateful day back in March, Good Morning Britain has been a floundering mess.

Susanna Reid, Kate Garraway and Charlotte Hawkins have been saddled with ropey guest hosts such as Alistair Campbell, Adil Ray and Richard Madeley.

Martin Lewis did it too – but I quite liked him!

While they were all perfectly adequate at reading their teleprompter and attempting to put their guests under some Piers-like pressure questioning, none of them really quite gelled with the GMB gals in the same way.

As a result, they left the show’s dwindling viewers divided.

But now it seems GMB bosses may have struck gold with former Blue Peter and The Big Breakfast host Richard Bacon.

Get Bacon on the box permanently

Admittedly Monday 23 was only his second time on the show. But his stint this week opposite Ranvir Singh has left audiences filled with glee, and many are demanding he be kept on.

Not only he is a rather handsome fellow to wake up to, he is a dab hand at asking the right questions.

He doesn’t try to out-Piers the legend – and also boasts a healthy dollop of charisma his previous stand-ins failed to muster.

Never one to play by the rules (his Blue Peter scandal is testament to that), Richard has a refreshingly wicked glint in his eye and a healthy sense of cynicism as he puts people on the spot.

While Piers was brutal and ferocious – rather like a famished lion waking up in Morrisons on a Saturday afternoon – Richard, who also dreams up game shows for his own production company, seems a lot more laid back.

Yet he still manages to fire out tough questions.

And it would seem he’s better at it than the current crop of jaded GMB presenters.

And, unlike his gobby though iconic predecessor, he actually lets his guest answer the question without butting in halfway through.

Which is a miracle on GMB, a show whose presenters love to hear the sound of their own voices.

What’s more important is that he has that likeability factor the other stand-ins didn’t have.

They all came across as self-important and pompous, while Richard – even at 45 – still sounds like a mischievous young whippersnapper in his twenties.

Read more: Piers Morgan responds to claims GMB staff ‘are desperate for him to return’

Better still, he has great chemistry with the other co-hosts.

So come on GMB – stop dilly dallying around. It’s time to rip up that endless list of Piers replacements and sign up Bacon.

After all, what is breakfast without a bit of bacon?

Head to our Facebook page @EntertainmentDailyFix and tell us if you’ve like to see Richard Bacon take over Piers’ GMB seat permanently.