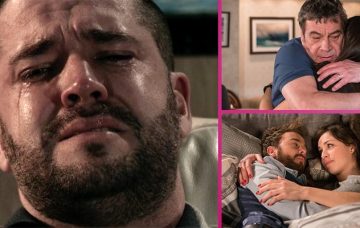 Let's face it, they get us talking about some tough subjects

Coronation Street has taken quite a bashing in recent times as it’s been criticised by many fans and critics for going in too dark with its storylines over the past 12 months or so.

It’s been a year that’s included a teenage girl being groomed and gang raped, a young male being drugged and raped by his so-called friend and another young man taking his own life.

While none of these storylines could ever be accused of being light, they’ve all done the job they set out to do – they’ve got people talking about subjects that just aren’t that easy to broach in our day to day lives.

In case you’ve missed the media storm this week, Aidan Connor – played brilliantly by Shayne Ward – made the devastating decision to end his life on Monday night’s show.

It wasn’t sensationalised. We didn’t see anything graphic on-screen. There was no 13 Reasons Why ‘suicide scene’. Everything was done through the sheer skill of the writers and actors.

And the result was heartbreaking TV that will go down in history for all the right reasons. It got us talking.

And in a society where suicide is the biggest killer of men under 45, where 84 men a week take their own lives – it really needs to be something we’re talking about.

Because talking can save lives.

Aidan’s tragic story has entwined itself perfectly with David Platt’s equally shocking rape storyline and has made a crucial point about this need to speak out.

David – as we know – was attacked back in March by sexual predator Josh Tucker and has been battling with his mental health since then.

His behaviour has been erratic – he’s violently lashed out at people, self-harmed, pushed people away and kept it all inside. He didn’t tell one single person about the rape.

That’s until this week when – after hearing about Aidan’s suicide – he finally opened up to Shona Ramsey and told her what happened.

He told her he wanted to live. That’s the power of talking.

Lorna Fraser, spokesperson for Samaritans who worked closely with Coronation Street on Aidan’s storyline, told us: “We hope Aidan’s story will encourage people to reach out and seek help, if they identify with Aidan’s experience. And also encourage others to speak to someone, if they’re worried they may be going through a tough time.

“People can feel apprehensive about doing this, worried they wouldn’t know what to say, or that they may make things worse. The point is it’s not about saying the right thing, it’s about reaching out to someone and letting them know you care, you’re here for them if they are struggling and want help.”

This week another UK charity Papyrus – who are solely dedicated to preventing young suicide – revealed that Aidan’s story had prompted a huge surge in the number of calls to its helpline.

The charity’s chief Ged Flynn told PA that there were three times as many calls than on a usual day following this week’s episodes.

He said: “There is strong evidence that says when something like suicide affects a cherished person perhaps in the public eye, it encourages others to seek help – and we’ve certainly seen that here.

“Our advisers were in all day and they worked relentlessly – none of them took a break due to the sheer number of people phoning up, texting, leaving voicemails, asking for help.”

Shayne himself has spoken out about viewers reaching out to him via social media and saying his scenes made them think twice.

He told The Sun: “A lot of people who are considering attempting suicide have got in touch to say, ‘I’m calling somebody now. I was attempting it and you’ve helped me.’

“The response has been truly overwhelming.”

Shayne previously encouraged viewers to find help and advice on ITV’s website in a video recording during which he said: “Talking can bring relief and it can help us see a way through, there is help and support available right now.”

Following the airing of David’s rape, national male rape charity Male Survivor reported a 1700% increase in calls to their helpline.

David’s story opened up that many conversations.

We’ve also seen Peter Barlow sit down with teenage son Simon and talk to him about suicide and mental health, telling him that if he is always there to talk to.

Hopefully this is mirroring what is happening in homes up and down the country this week – people reaching out to young men who live in this culture of silence we have around male mental health – and helping to break it down.

And if just one life is saved by one conversation that stems from a soap storyline, then it’s got to be worth it.

If you are struggling, contact Samaritans for free on 116 123 for support and guidance.