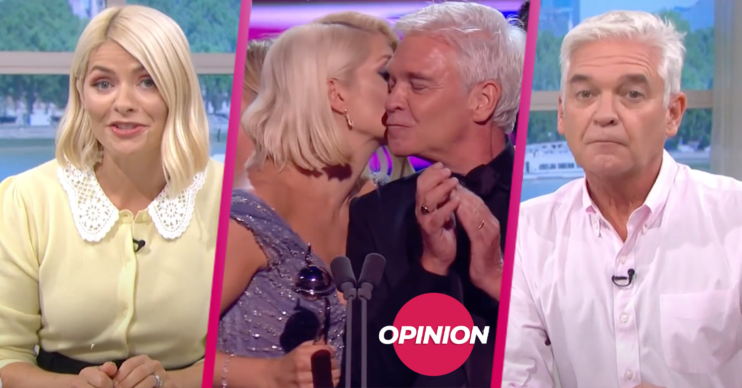 OPINION: This Morning stars kissing as show wins NTA and distancing on screen is just silly

It's time for a shake up

This Morning won an NTA for Best Daytime last night (September 9) and the stars of the show celebrated by kissing and hugging en masse.

After the National Television Awards ceremony they even celebrated with their “obligatory lift selfie”.

This saw Holly Willoughby, Phillip Schofield, Eamonn Holmes, Ruth Langsford, Rochelle Humes and about 10 others crammed in posing for a photo.

So why, pray tell, are they STILL making such a song and dance over social distancing on screen?

It’s time for a shake up, This Morning.

This Morning cast distance – but not at NTA ceremony

Cast your minds back to last Monday (September 6), when Holly and Phil returned from their extended summer break.

They made quite the show of the fact they had a big announcement to make and went on to tell viewers that the two metre rule was no more.

Instead, they now have to sit one metre apart. Despite sitting next to each other and sharing a selfie at Wimbledon over the summer.

Do they think we were born yesterday?

COVID rules at the NTAs

Now, everyone who attended the NTAs last night had to provide a negative COVID-19 lateral flow test.

Holly, Phil and the gang are all, by now no doubt, double jabbed.

So why, with all that in place, are they still not allowed to sit together on screen?

If you ask me it’s time for This Morning to make a stand and normalise life again.

Kissing, hugging and mixing – just not on screen

It’s pretty insulting to viewers – and they’ll agree if you take one look at Twitter – to continue distancing on This Morning when you’re all over each other at the NTAs.

And we’re not just talking about sitting next to each other.

They were hugging, kissing and about a dozen households must’ve been mixing in that lift.

So why not on screen?

I’m more than sure that when the time comes for social distancing to officially end Holly and Phil will make a right old song and dance about hugging again.

When they’ve clearly been doing it behind the scenes – and right in our faces on social media and other shows – for as long as it’s been allowed.

I appreciate the fact that ITV wants to keep its cast and crew safe and keep the series on air.

But the This Morning team displaying such closeness as they attended the NTA ceremony and still staying apart on screen is nothing short of ridiculous.