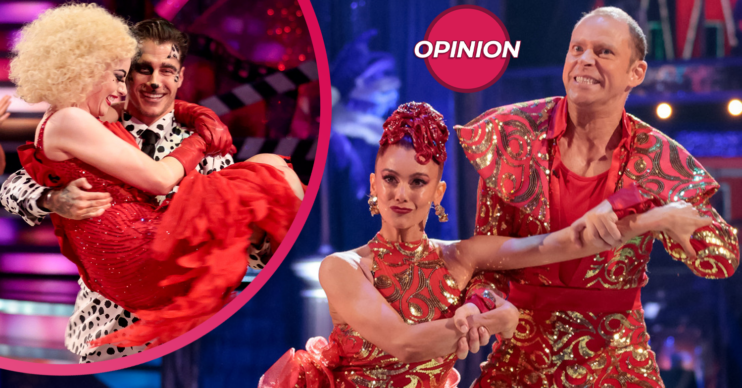 OPINION: Rob and Katie shouldn’t have signed up for Strictly 2021 if they couldn’t fully commit

Now I’m in no way saying he should’ve stayed and made the ballroom a priority over his health.

You do you and all that Robert.

But should he really have signed up if there was a chance he wouldn’t be able to fully commit?

I really think he should’ve sat this one out.

Why? Well there’s a few reasons.

Strictly is one of the most popular shows out there, the BBC’s flagship Saturday night show that brings glitz and glamour all the way up until Christmas.

Celebrities are falling over themselves to take part.

Earlier today, in fact, singer Olly Murs put out a plea begging the show to let him take part.

If someone of that calibre wants to do the show, and they’re perfectly fit and able to and their work schedule allows, the BBC should be signing them up.

Read more: Ugo Monye pulls out of Strictly over back injury

Competing on Strictly, while rewarding, is a long old stretch, with long days of dance training inflicting huge amounts of stress on the body.

Not to mention nerves and adrenalin which must play havoc with both body and mind.

So why sign up if you’ve not long had open heart surgery?

Surgery that took place two years ago and was a life-saving necessity.

I’m no doctor but I just don’t understand how could he have expected to be up to the eight hours of rehearsals each and every day and the strain it would doubtless put on his body.

It’s the Strictly 2021 pros I feel sorry for

The lovely Dianne Buswell said she loved being partnered with Robert, but wouldn’t she have preferred to dance with someone who could give it their all?

She puts her heart and soul into the show, as do all the pros, and I think it’s a crying shame she’s out early.

The same goes for Gorka ‘the corker’ Marquez.

He was partnered with Katie McGlynn who, thanks to her commitments with Hollyoaks, revealed on It Takes Two that she could only train for three hours a day.

Why sign up if you can’t fully commit to the show?

And, if you can’t put in the training, should you really be collecting the show’s full salary…?

The majority of the other celebrities manage to cram in eight hours of dance practise each and every day.

Pros uproot from their family homes – and young child in Gorka’s case – to relocate to where the celeb lives to make things easier on them.

And still she could only spare three hours.

A girl’s gotta pay her bills, but still.

Poor old Gorka has never really had a proper shot at that Glitter Ball trophy which is a crying shame.

Throw in rumours of a rift and it was an early exit from the show for him.

Strictly 2021: It’s time for the BBC to make a stand over stars who sign up

The show’s pros deserve better than this.

And, if you ask me, the BBC needs to employ a stricter selection process to make sure contestants are able to commit, in all senses of the word.

It’s time for a shake up, and I for one hope the 2022 series brings celebrities who really and truly want to be a part of this magical show.