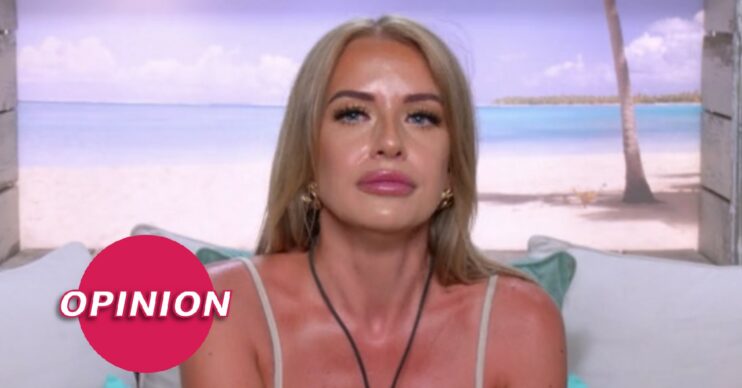 OPINION: ‘Faye thinks she owns the Love Island villa – it’s about time someone speaks up!’

Has she gone too far this week?

Faye Winter has provided the Love Island villa will some of the most explosive moments this series.

From her screaming match with Teddy Soares to putting Jake Cornish in his place, the lettings manager certainly isn’t one to keep quiet.

But it seems that some of her fellow Islanders appear to be walking on eggshells in the villa – and it just isn’t right!

What has Faye been up to in the Love Island villa?

The past few weeks have been particularly rocky for Faye.

While she was always known for being the most straight-forward of the group, tensions boiled over after Teddy’s stint in Casa Amor.

Faye recoupled with new boy Sam following a postcard from the second villa, in which Teddy was pictured flirting with another girl.

However, the couple decided to patch things up and soon reunited.

But it didn’t take long for cracks to show again.

Faye erupted after being shown a clip of Teddy admitting that he was sexually attracted to another woman in Casa Amor.

During the heated argument, she also managed to completely skip the fact she called Teddy ‘unfunny’.

Very convenient if you ask me!

And her epic war of words didn’t end there.

Last night (August 17), Faye kicked off on her fellow Islanders after being voted as one of the least compatible couples.

She yelled at Jake over his relationship with Liberty, before guilt-tripping Liam and Millie for their vote.

So, what do I think about it all?

It’s about time Faye pipes down!

While I’m usually a fan of reality TV drama, Faye has certainly overstepped the line.

Although her argument with Teddy was pretty uncomfortable to watch, I wasn’t prepared to hold a grudge for the sake of a few F-bombs and a raised voice.

Especially when Teddy got over it so quickly!

But it’s Faye’s behaviour in recent days that’s really wound me up.

Firstly, her reaction to the compatibility vote was completely out of order.

Every single one of the Islanders had to vote for three couples and as far as I’m aware, Faye and Teddy weren’t exempt.

I also think it’s ridiculous for Faye to even suggest that her co-stars should have came clean about who they voted for.

If you were so secure in your own relationship, it wouldn’t even matter who voted for who.

But while Faye has acted completely unreasonable, isn’t it time the Islanders stood up to her?

Millie and Liam were the only couple willing to put Faye in her place.

Before their awkward chat, Millie admitted: “It would be fake if we didn’t chose Faye and Teddy because we were scared about what was going to happen after it.

At the moment, it just seems that the Islanders are tip-toeing around Faye in the hope she won’t unexpectedly combust.

But will Faye eventually realise the entire villa isn’t against her? Or will she continue to make the Islanders – and viewers at home – feel uncomfortable? I certainly know what I think.