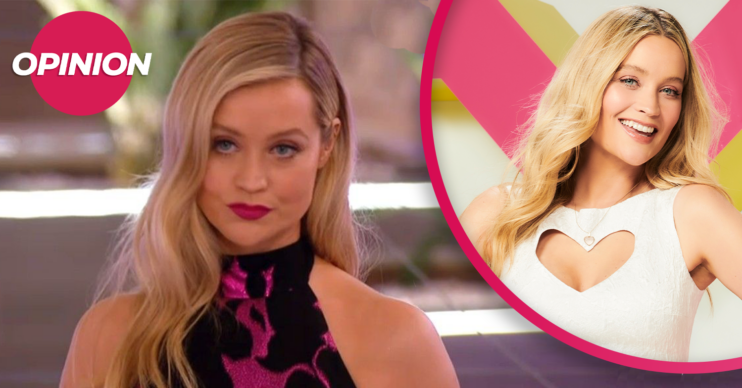 OPINION: ‘Laura Whitmore – stop biting the Press hand that feeds, there are plenty of hungry celebs’

Love Island 2021 host Laura Whitmore has ruffled a few feathers of late by attacking the press for intruding into her private life.

After clearly finding it an aggressive and confronting gesture – which I should add was made via the proper channels – Laura angrily took to Twitter to slam the writer as “vile”.

If that wasn’t bad enough, this weekend Love Island host Laura got her knickers in a twist when her interview with The Sunday Times was published.

Read more: Caroline Flack stomping into the villa and other ‘Flackisms’ Love Island viewers are missing

Not only was she unhappy that the finished article focused on her daughter (she was mentioned in the opening lines…), she was also unhappy with the way it was written.

Taking to Twitter once more, she singled out phrases in the text that she said could be triggering. TRIGGERING.

Phrases such as “well-behaved baby” and “she skips off to the villa”.

We need to be careful of how we use language and the triggers it can have @thetimes pic.twitter.com/5YjyIgNqKD

Wow, Laura! We feel your pain.

Those kind of questions and phrases are enough to give even the strongest of us sleepless nights, right?

Come on now, relax a little.

We all know how the game works.

If you work in the public eye, you have to expect to be asked a few personal questions when you’re doing the press rounds to promote products you are potentially going to make millions for.

Think about your fans.

Who is going to get excited hearing about your product?

We all want to know a little something about what life away from the cameras is like for our favourite celebs – which you so often give a tease of on Instagram.

Of course, Laura and her family deserve their privacy, especially from the intrusive eye of the paparazzi, who do sometimes cross the line.

No one deserves to be hounded or have untruths written about them.

And I was the first to cheer on Laura when she spoke movingly on her radio show about the death of her friend Caroline Flack.

She eloquently and quite rightly called for an end to the media making celebrities’ lives a misery by writing nasty and intrusive stories.

But surely asking about your happy news is nothing to get bent out of shape about?

And why get upset about skipping off to the villa? How is that triggering?

It’s not like you were being challenged about hosting a vacuous reality show that promotes promiscuity and idealises lads and lasses with perfect bodies.

Love Island host Laura has to play the game a little

Laura willingly entered the world of showbiz, after training as a journalist, to work as a celebrity interviewer. And she is fully aware she has to play the game a little now the shoe is on the other foot.

When a celebrity reveals a small part of big life events, it is inspiring to fans who look up to them.

And Laura knows this.

A year or so ago she bravely opened up about having had a miscarriage.

She also admitted that she had done so because she wanted to write about something she thought might help others.

And it did. When the piece appeared, she said she was overwhelmed with responses from other women who had gone through similar experiences.

However, it is worth noting that in the same interview, Laura explained she loves conducting interviews with people so she can find out more about them than meets the eye.

“Storytelling for me is very important. That’s why I love interviewing people,” she said.

“The more people you meet and the more stories you learn, the more informed you are and the more you think about things.

“The more we share, it is just so helpful.

“When you start out in this industry, you are told to be careful what you say because it might be twisted in the wrong way. But I’ve learnt if you’ve got something to say, say it.”

So Laura, we know your priority is to protect your daughter from the glare of the showbiz world.

But surely answering a few basic and well-intentioned questions isn’t going to hurt. Otherwise, journalists may just grant you your wish and stop writing about you, your career, or any money spinning project you want help promoting.

So what do you think of Laura Whitmore? Join the debate on our Facebook page @EntertainmentDailyFix.