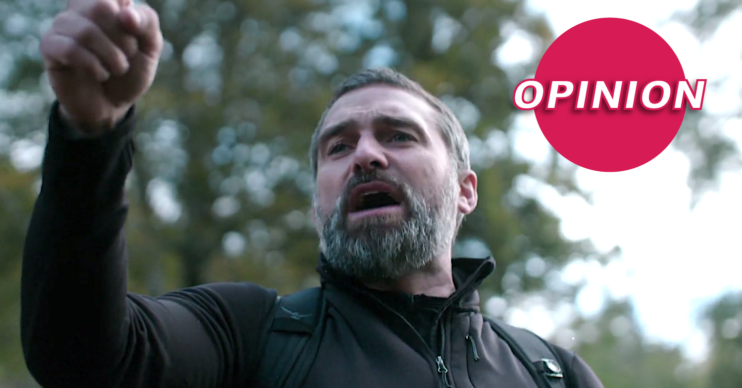 But should we be surprised?

The physical challenge series is meant to be tough and hard and all of that kind of stuff. But with contestants dropping like flies, is it time to end this macho nonsense?

The first person to quit last night (Sunday September 12) was Saira Khan, whose ankle injury worsened as she ran over rough terrain.

“It’s about trying. If I’ve tried my best, I’m not going to beat myself up,” she said as she exited the course.

In the next challenge, couples once again paired up to carry a huge metal barrel over 4km.

Vicky Pattison struggled and she quit.

During her to-camera interview, she movingly explained that she has a fear of letting people down – ever since she had sex on TV and her mother wouldn’t talk to her afterwards.

During the same challenge, champion BMXer Shanaze Reade badly injured her shoulder and she was withdrawn from the course.

So we were faced with three contestants down after some brutal challenges.

Jake Quickenden tore his pectoral muscle during a challenge that saw him pulled into the water by a speedboat.

With Kerry Katona quitting last week, the question has to be asked: shouldn’t this really be the end of Celebrity SAS?

Celebrity SAS: A step too far?

We get it. People like to test themselves, to face down demons and fears and rise to the challenge.

And with Celebrity SAS: Who Dares Wins, you won’t find tougher challenges.

Shows such as Strictly and MasterChef cover those bases and we as viewers love to see celebrities and even members of the public go on their journeys.

It’s life-affirming and even inspirational.

But Celebrity SAS? It’s a step too far.

Listen, I have the greatest respect for army personnel and the mental and physical toughness they possess.

And I don’t want to watch people break down on TV as they face their deepest, darkest demons.

I also don’t want to see broken shoulders, torn pectoral muscles and the like. To me, that’s not entertainment.

And when you throw in a bunch of hard men shouting at contestants calling them “[bleeping] nothing. You’re nothing!” it’s definitely not entertainment.

We’ve seen TV series cancelled for less (hello, Channel 4’s The Jump), so I wonder if Celebrity SAS: Who Dares Wins can possibly carry on.

I’ll stick to Strictly and the occasional Park Run for now.