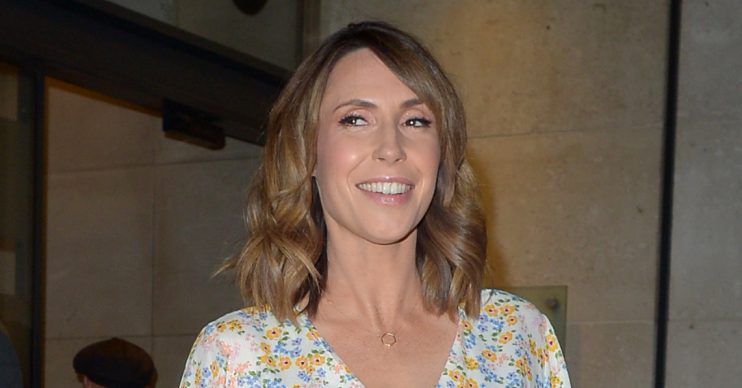 Pregnant The One Show host Alex Jones has given her fans a big clue that her baby is due to arrive any day now.

The presenter, 42, went on maternity leave last month, bidding her co-stars an emotional farewell as they saw her off with a rather odd parting gift.

Since then she’s offered fans regular updates on Instagram, and although she hasn’t revealed her exact due date, her latest could suggest she’s set to give birth very soon.

Taking to her Stories, Alex shared a snap of her two-year-old son, Teddy, playing on a huge tree stump as his watchful grandparents look on.

She captioned the pic: “Grandparents have arrived and standing by…”

ED! has reached out to Alex’s reps for comment.

Alex only recently opened up about her fears of the prospect of looking after two young children.

In a candid discussion on the podcast I See What You’re Saying, Alex admitted she is “slightly terrified”.

She explained: “Everybody has nerves about being a mum and being a parent. Pregnancy for any woman is a period of excitement, also slightly terrifying as you don’t know what to expect. Even with your second it’s like, ‘How am I going to do two?'”

Last week Alex, who married husband Charlie Thomson in 2015, joked that she was trying to speed things along and had even set herself a goal of beating Meghan Markle to it.

She shared a photo of raspberry leaf tea, which is said to help induce labour, and told her Twitter followers, “Trying to beat Meghan… or is it already too late?!”

Trying to beat Meghan….or is it already too late?! pic.twitter.com/7lAz6lnGOp

It was a reference to suggestions that Meghan had given birth in secret, and that she and husband Prince Harry had yet to announce it – although that theory was proven to be false when the royals announced the birth and revealed baby Archie was born at 5.26am on Monday (May 6).