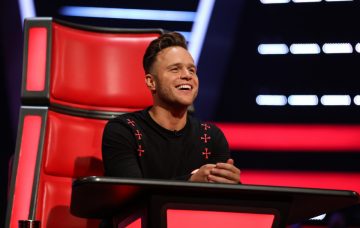 The singer turned him down

Olly Murs claims Simon Cowell tried to lure him back to The X Factor, but says he has more “chemistry” with the judges on The Voice.

The 34-year-old singer came second on the ITV singing competition in 2009 and returned to host the show’s spin-off The Xtra Factor with Caroline Flack in 2011 and 2012.

Read more: Olly Murs and Jennifer Hudson fall out on The Voice

The duo then took on hosting duties of the main show for one year in 2015.

But since last year, Olly has been a coach on rival ITV talent show The Voice, and has now said that although former boss Simon Cowell wanted him to stay at The X Factor, he’s having a better time with fellow coaches Sir Tom Jones, Jennifer Hudson, and will.i.am.

When asked during an appearance on Good Morning Britain if Simon had attempted to lure him back, the Troublemaker singer said:

“He did. Listen, I love Simon and I love X Factor, I’ve got nothing but love for the show.

“It wasn’t about money it was more about The Voice judges and the chemistry we had as a team. If one of them wasn’t coming back it might have been a different decision, but I just love the show and the people on it.

“They gave me an amazing opportunity to be a coach and help other people. I’m having a great time on it, it’s great fun.”

Olly was reportedly offered £3 million to return to The X Factor as a judge for last year’s series, but he turned it down and the position eventually went to former Take That member Robbie Williams.

Meanwhile, Olly has been causing trouble on The Voice, apparently falling out with fellow coach Jennifer Hudson.

She revealed to The Sun she and Olly had a “proper falling out” over an act, and Olly admitted he was forced to apologise after playing dirty.

Do you think Olly should have gone back to X Factor? Leave us a comment on our Facebook page @EntertainmentDailyFix and let us know what you think!