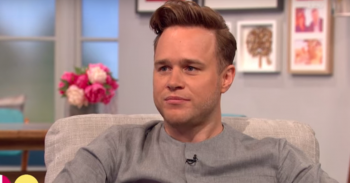 Olly Murs opens up about undergoing therapy for anxiety

The Voice’s Olly Murs has revealed he sought therapy after enduring a terrifying panic attack while appearing on TV.

Olly, 34, told how he was left struggling for breath during the worrying ordeal which happened as he was about to perform on The Graham Norton Show.

The Troublemaker singer recalled in a chat with The Mirror how he attempted to calm himself as his heartbeat accelerated while in front of a watching crowd in the telly studio.

But despite never experiencing such acute anxiety before, Olly ploughed on – even though the routine performance began badly as he drew a blank.

He also admitted he had difficulty trying to work out what was happening to him, even though he had performed the same number plenty of times before.

“I was looking at my mum and dad in the audience and trying to focus, despite the fact I’d just forgotten my lyrics,” he told the newspaper.

The Essex TV fave noted he suffered a similar attack after being given his role on The Voice, speculating his anxiety stems from an accidental error from his days presenting The X factor when he got judges’ scores mixed up.

According to the news outlet, a therapist helped Olly come to terms with how the fall-out from incorrectly announcing the departure of an act had affected him.

“It was the idea of going on TV again, maybe making a mistake and being put in the spotlight again with people saying negative things about me,” he is reported to have said.

“I’ve only ever had a career that’s been so positive. And when you get that little bit of negativity, it hurts.”

A firm favourite with viewers of The Voice, he recently claimed Simon Cowell has been trying to lure him back to rival talent show The X Factor – but Olly reckons he has more chemistry with the judges he currently works with.

According to reports, Olly was offered £3 million to return for last year’s series. It is thought the position he turned down was eventually filled by Robbie Williams.

I do take my job very seriously 😂🤣😝