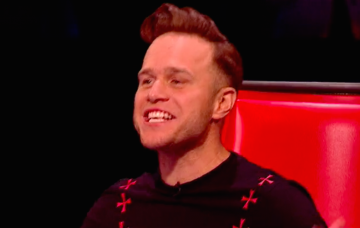 We can't believe he did it

Olly Murs left viewers of The Voice UK a bit disgusted after doing something rather gross during the show’s opener.

The competition returned to ITV on Saturday for its eighth series, with Olly Murs featuring as a coach alongside fellow stars Will.i.am, Sir Tom Jones and Jennifer Hudson.

But viewers were shocked and a bit revolted when the former X Factor singer did something bizarre while fighting over a contestant group with Jennifer.

A trio called Remember Mondays moved Jennifer so much that she tossed her shoe at them, prompting Will.i.am to step in and explain that the gesture was actually a big compliment.

He said it meant Jennifer was offering part of her soul, and Remember Mondays were pleased.

But Olly picked up the shoe and Will.i.am told him: “You stole her soul!”

Remember Mondays chose Jennifer as their coach instead of Olly, who then decided to give the shoe a sniff.

What’s more, he took to Twitter to remind his fans of the moment, posting a gif and captioning it: “For everyone asking @IAMJHUD feet smell great…”

Understandably, viewers were somewhat grossed out.

One Twitter user said they would never do what Olly did, despite being Jennifer’s “biggest fan”. Another wasn’t convinced it smelled nice at all and someone else tweeted “So wrong” with a disgust emoji and crying-laughter faces.

Others were kinder though, with one viewer telling Olly that the sniff was “so funny” and another pointing out that his weirdness is why we all love him.

Olly shot to fame in the late ’00s when he placed second in the sixth series of X Factor.

It emerged just recently that Simon Cowell wants to get him back as a panellist on his hit singing competition.

In October, Olly admitted that he wasn’t even sure if he was on speaking terms with Simon any more after turning down a previous offer to feature on The X Factor.

What do you think of Olly’s shoe-sniffing antics – funny or just plain horrible? Leave us a comment on our Facebook page @EntertainmentDailyFix and let us know what you think!