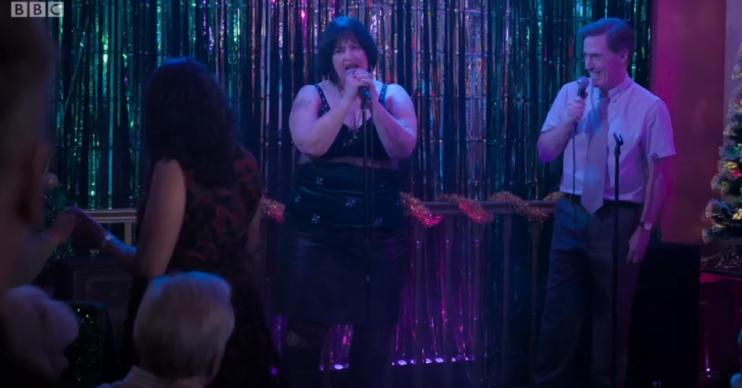 Some people thought it should have been bleeped out

A small number of viewers of Gavin and Stacey have complained to Ofcom over the use of the word “faggot” in the Christmas special.

The episode went down a treat with fans after over 12 million people tuned in, making it the most successful Christmas Day programme since 2008.

However, some viewers were outraged when the word was used during Nessa – played by Ruth Jones – and Uncle Bryn’s – played by Rob Brydon – karaoke song.

They sang a rendition of The Pogues’ Fairytale of New York, which contains the word.

Many viewers said the BBC should have bleeped the word out or removed it completely.

The BBC is required to assess and investigate complaints about its programmes initially.

Many complained on Twitter and 11 people voiced their outrage to watchdog Ofcom.

A spokesperson told The Sun: “We’ve received 11 complaints. The BBC is required to assess and investigate complaints about its programmes initially.

“But if complainants are unhappy with how their complaint has been addressed by the BBC, they should bring it to us and we’ll examine it.”

Ruth Jones and the BBC recently defended the use of the word in the show.

Ruth said she and co-star James Corden, who plays Smithy, wanted to stay “true to the characters”.

Speaking to The Sun, the actress said: “It is a different climate. But we have to remain true to the characters, to who they were.

“Characters in Gavin & Stacey are kind and big-hearted, I believe. So I think no one is going to be intentionally hurtful.

“But by the same token, they’re not necessarily going to be completely politically correct or be aware of political correctness.”

Using the word ‘faggot’ is not acceptable in 2019. It’s offensive and unnecessary. End of. #GavinandStacey

A BBC spokesperson added: “Fairytale of New York is a very popular, much-loved Christmas song played widely throughout the festive season, and the lyrics are well-established with the audience.”

The episode proved a hit with many fans and they are begging for a new series after the festive special ended on a cliffhanger.

The end of the show saw Nessa propose to Smithy but he didn’t give an answer as the programme cut to credits.