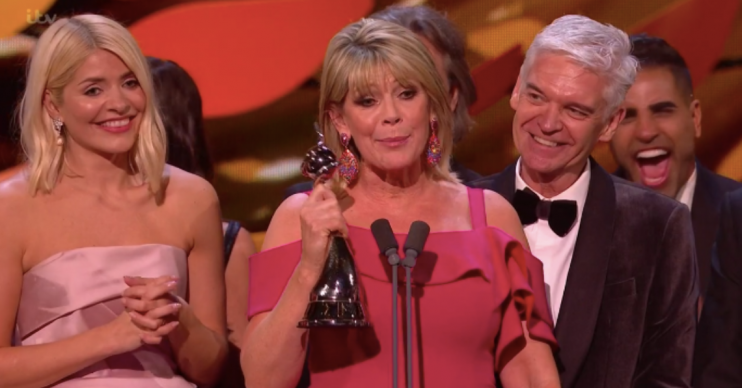 Cut the tension with a knife?

Daytime staple This Morning has won Best Live Magazine Show at the National Television Awards for a 10th year.

The huge cast took to the stage as main anchors Holly Willoughby and Phillip Schofield gushed over the award.

Holly made a point of referring to her co-host as having a heart of gold, before he then credited Friday presenters Ruth Langsford and Eamonn Holmes, touching her arm.

The most awkward chemistry on TV goes to This Morning.

He even said, ‘We love them,’ and it would have been the perfect moment to put to bed rumours of a rift between Ruth and Phil.

But, then, Ruth stepped forward to deliver a speech and didn’t even acknowledge Phil, adding more fuel to the fire.

Earlier this year, reports claimed that, behind the scenes at This Morning, it’s not the big happy family scenario the show likes to portray.

Phil and Holly both denied that there was any foundation to it.

But after Ruth’s apparent refusal to ‘play nice for the cameras’, Twitter BLEW UP!

@schofe got short shrift from #ruth at the #NTAs – any light you can throw on this?

2011-2019: Phil and Holly give the @thismorning acceptance speech

It’s almost as if he has something to prove.#NTAs

The most awkward chemistry on TV goes to This Morning. Got to love Ruth for clearly showing what she felt! No amount of Holly gushing about Phil could help the situation! #NTAs

Me watching Phil & Ruth at the #NTAs #ThisMorning 🤣🤘 #teamruth pic.twitter.com/0NnD5Cdg2l

#NTAs that was so awkward between phil and Ruth bye 😭😭😭

Read more: Holly Willoughby leads the style at the NTAs

What did you make of this? Leave us a comment on our Facebook page @EntertainmentDailyFix and let us know.