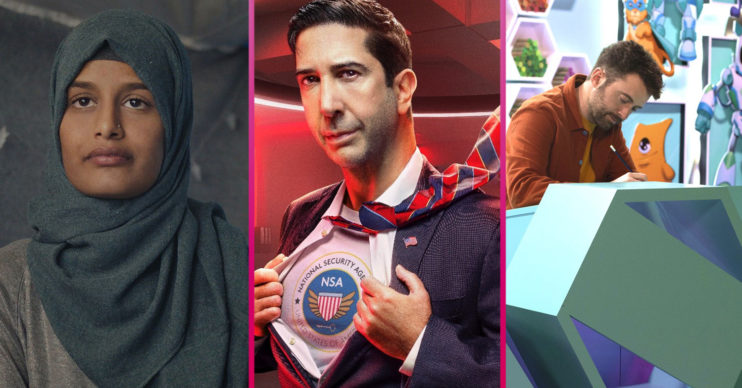 Everything coming to NOW in June 2021: From David Schwimmer in Intelligence 2 to Prodigal Son

Any excuse to spend more time on the sofa.

Calling all movie lovers and telly addicts! NOW in June has more than enough to keep you glued to your sofas.

Who needs a social life when you’ve got some good comedies to binge watch?

From original comedies to hard-hitting documentaries about the downfall of ISIS, there really is something for everyone as we head into summer.

Here’s everything coming up this month…

What TV shows are coming to NOW in June?

Despite their jobs, there’s nothing intelligent about Jerry and Joseph – two bumbling National Security workers with a habit of causing chaos.

In the latest series, agent Jerry has been tasked with battling Russian cyberweapons, while Joseph is just trying to sort out his love life.

The legendary Michael Sheen stars as a twisted convicted serial killer in this gripping thriller.

Tom Payne, of Walking Dead fame, plays his son, Matthew Bright, a criminal psychologist who is forced to bond with his father in a bid to solve a string of murder cases.

But are they more alike than Matthew would like to believe…?

Betty follows a diverse group of young women navigating their lives through the predominantly male-oriented world of skateboarding.

The story of the 1980s drugs boom, with its epicentre in Liverpool, which turned dealing into a multi-billion-pound business.

The film has access to some of the biggest criminal players, and will reveal how drugs went mainstream both in the city and across the country.

Shamima Begum and Hoda Muthana both speak out in this hard-hitting documentary about life in ISIS.

Making global headlines when they left their countries as teenagers to join ISIS in 2015, the pair discuss what happened to them and why they want to return hom.

The Return shines light on the personal journeys of those trapped in Syria after the fall of ISIS.

Definitely something for the kids on a rainy day, the characters include the likes of the iconic Spongebob Squarepants.

What films are arriving on NOW in June?

The long-troubled release of The New Mutants clouded the release when it first came out – but now you can finally see what the fuss is about.

Five teenage mutants – Mirage, Wolfsbane, Cannonball, Sunspot and Magik -undergo treatments at a secret institution that will cure them of their dangerous powers.

Two movie producers who owe money to the mob set up their ageing movie star for an insurance scam to try and save themselves.

The absolutely iconic Jurassic Park movies, all five of them, will be coming to the service this month.

Kindred is a psychological thriller about a vulnerable mother-to-be who is taken in by her recently deceased boyfriend’s mother and stepson.

However, they soon seem increasingly obsessed with her every move…