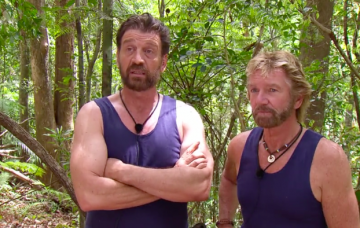 TV legend Noel Edmonds has brushed off reports claiming he butted heads with Nick Knowles in the I’m A Celebrity jungle, insisting he did not quarrel with campmates at all.

The 69-year-old dismissed talk of a feud with the DIY SOS presenter to the Mirror as “fake news” – but hints he was indeed on a mission to wind Nick up.

Cheeky Noel, the first celeb to be booted off this year’s series, denied a row revealed by Hollyoaks actor Malique Thompson-Dwyer to a national newspaper before teasing Nick for being ‘self-important’ in the same breath.

It was reported that Nick and Noel had debated evolution, having “big disputes” over human ancestry.

But according to Noel he was being playful when discussing whether or not humans are evolved from monkeys with Nick, 56.

Noel told the Mirror: “I was winding Nick up because he has such a high opinion of his opinions. The others were cracking up and it was a joke. It’s a shame Nick couldn’t see through my mischief.”

And in a video message, the former Noel’s House Party host joked the debate could be settled by his Crinkley Bottom friend.

“Well, I didn’t get in any arguments. The best one to date is apparently Nick and I had an argument about the evolution of man,” Noel said, speaking from the Palazzo Versace hotel down under.

“Well, he was talking about our progression, but I never got to point out that we have all evolved from Mr Blobby.”

The pair first clashed on the show when camp leader Nick tried to enforce the rule that no one should leave the site unaccompanied, which Deal or No Deal presenter Noel repeatedly ignored to collect firewood alone.

After being evicted from the camp, Noel admitted he isn’t a fan of “rules and regulations”.

He said: “Nick I think is great, he’s a natural leader and he just wanted to make sure we were led.

“I do have a problem sometimes with rules and regulations. There was no needle, maybe just a little [bleep].