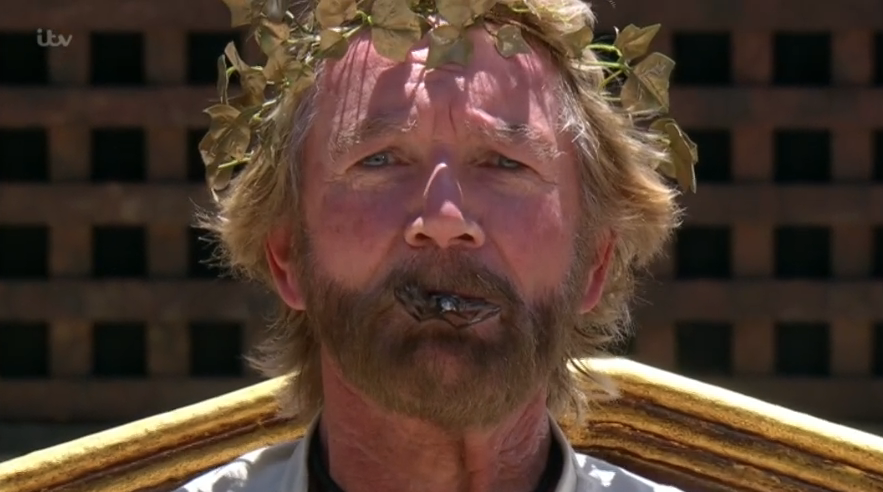 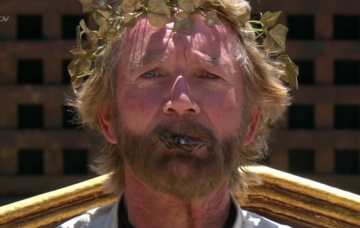 Sheep's brains were on the menu

Noel Edmonds and Harry Redknapp thrilled I’m A Celebrity fans with a perfect clean sweep in the first bushtucker eating trial of the series.

The pair first had to keep a series of bugs in their mouths for 60 seconds before tucking into a meal including sheep’s brains.

Host Holly Willoughby had to turn away and covered her eyes as they went through the challenge.

The trial marked the “fall of the Jungle Empire” as Emperor Noel and his personal adviser Harry relinquished their roles.

As the other celebs watched on inside the Jungle Colosseum, the duo were told to hold live critters between their lips for a minute at a time to win the first seven meals for camp.

Noel said: “The end of the Empire is a very painful experience.”

Harry added: “Yeah, we’ve got to get some food for the gang.  We can’t leave them to get no food tonight.”

Noel’s first critter was a stick insect, before Harry had to place six beach worms in his mouth.

For his second challenge, TV veteran Noel was faced with a yabbie.

After successfully completing that part of the task, Harry followed suit with six wichetty grubs.

Emperor Noel had the final part of the trial, called Nero to Zero, and managed to hold a huntsman spider between his lips despite Harry singing: “I know an old woman who swallowed a spider…”

With seven stars already under their belts, the pair then won a further four in the eating task, called the Roman Banquet.

They began by each devouring a sheep’s brain from a skull before being presented with the final course, fish eyes.

Declan Donnelly told them: “You have to squeeze the fish eyes in your mouth until they pop, then spit the contents into the sieve there and then the juice will trickle down into a goblet.

“You have to repeat the process until the goblets are full up to the red line.”

The penny dropped for the pair when Holly Willoughby added: “I’m afraid it gets a little bit worse than that,” as Noel and Harry realised they had to then drink from the goblets.

Once more, though, they both succeeded and raised a toast: “Hail the Empire!”

Viewers shared their joy on social media after the trial.

Pretty much in love with Harry redknapp #ImACeleb

Well done on the trial Noel and Harry, second full house of the series #imaceleb

With a maximum 11 stars for camp, the celebs dined out on crocodile and Hawaiian potatoes.

What did you think of Noel and Harry’s trial? Leave us a comment on our Facebook page @EntertainmentDailyFix and let us know what you think!