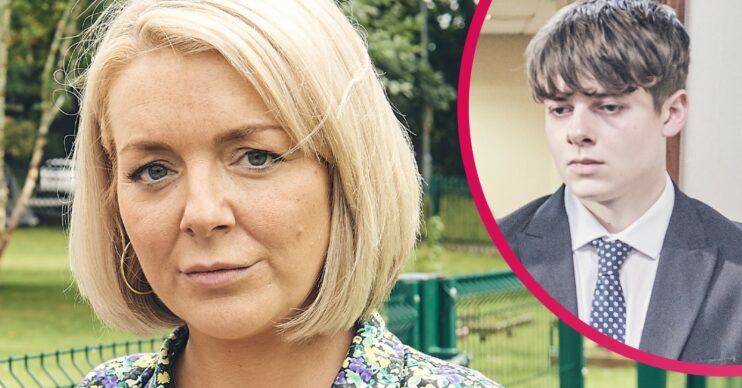 No Return came to an emotional finale this week as the Powell family faced their biggest trial yet – here’s the ending explained.

Noah finally had his day in court in the four-part drama.

But was he found guilty of sexually assaulting Spanish boy Milo?

Here’s everything you need to know about the ITV thriller No Return and its ending.

***Warning: spoilers from episode four of No Return ahead***

No Return ending explained – what happened between Noah and Milo?

After suffering what appeared to be a panic attack during the trial, Noah asked to give his version of events in front of the judge.

The 16-year-old explained how he had been bullied at school for being gay, and had seen the holiday as an escape.

He added: “I came on holiday angry, I admit it.

“I was happy to go to the party.

“I could tell Milo fancied me, and I fancied him.

“We were basically the same age; it was one of those instant things.

“We chatted and we drank, and we both knew we wanted to get off with each other, so we suggested that we go somewhere quieter.”

Noah went on to describe how they went on to the hotel grounds and started kissing, before “things got pretty heated, pretty quickly”.

During this encounter, Milo’s mother called his phone – causing Milo to struggle with his emotions.

The Spanish schoolboy spat at Noah, which Noah interpreted as a sign of rough play.

He admitted he pushed Milo against a wall, and kissed him forcefully.

Milo kissed back, before Noah spun him around, and put him hand on the back of Milo’s shorts.

Noah described how they had both ejaculated.

When Milo’s mum called a third time, Milo seemed to become full of hate for Noah and left.

We still don’t really know why Milo decided to press charges and then retract his claims.

Read more: No Return on ITV: What else has Danny Brocklehurst written and where can you watch?

Lawyer Rico was back, and argued for Noah’s freedom.

But the case against the teenager (played by Louis Ashbourne Serkis) was strong and his family all feared the worst.

In the first hearing, eyewitnesses confirmed that Milo initiated the flirtation – and looked older than his years.

We were told that Milo’s religious mother held extreme beliefs about homosexuals, and even believed in conversion therapy.

Which would explain why Milo lied about their night together.

However, the court threw the evidence out of court believing the crime DID happen and remained intent on prosecuting Noah.

Noah told parents Kathy and Martin he did NOT assault Milo.

Rather Milo kissed him and touched him instead.

Noah was advised to plead guilty and possibly face a reduced sentence.

Or, if he continued to insist on his innocence, it would lead to a “roll of the dice” verdict, depending on the judge.

During the trial, it looked like Kathy’s decision to pay off the police could have derailed the case.

However, after Noah’s heartfelt testimony, Noah was found NOT guilty of sexual assault.

Bizarrely, though, the judge went on to explain that “by the laws of Turkey, a crime was committed”.

So Noah was found guilty after all and sentenced to three years in prison.

But, in another twist, the judge explained that as a result of Noah’s age and the belief that he was of no further risk to the public, he was prepared to suspend the sentence.

At the end of the trial, Noah was released from prison and free to return to the UK.

Talk about a rollercoaster verdict!

No Return ending explained – did Kathy and Martin stay together?

All the venom thrown between Kathy and Martin seemed to disappear in the series finale.

By the end of episode 4, the pair seemed to be back on track.

The family all returned to the UK happy to have Noah back with them.

In an all-too brief scene, Martin was seen showing some of the backbone Kathy had accused him of not having.

During a heated phone call with his bully boss Carl, Martin stood up for himself and his wife Kathy and told him to “stick his job up his arse”.

Kathy very quickly forgot everything that annoyed her about her husband and looked misty eyed at him (or it could have been the gallons of wine she’d been consuming beforehand).

It’s one example of why the series would have benefitted from being six episodes.

Some of the finer details felt rushed – with way too much emphasis on Megan and her affair with Ismail.

No Return ending explained – did Megan stay in Turkey with Ismail?

In episode four of No Return, Megan left her husband and returned to Turkey with her son Fred.

However, her husband Steve followed them and took Fred when Megan was on a date with lover Ismail.

In another story that felt rushed and unexplained, Ismail was never seen again and Megan returned to the UK with Steve and his “middle class addiction” to drugs.

Would they stay together? We doubt it.

But whether Megan and Ismail would ever see each other again was left unanswered.

No Return second series – will it return?

ITV has not confirmed a second series of No Return.

Danny Brocklehurst wrote the series as a four-part drama.

Noah’s fate was revealed in the final episode – the fourth instalment – and he was able to return home to the UK.

Writer Danny left some loose ends dangling, but it seems that’s the end of our journey with the Powell family.

No Return is available to watch on the ITV Hub.