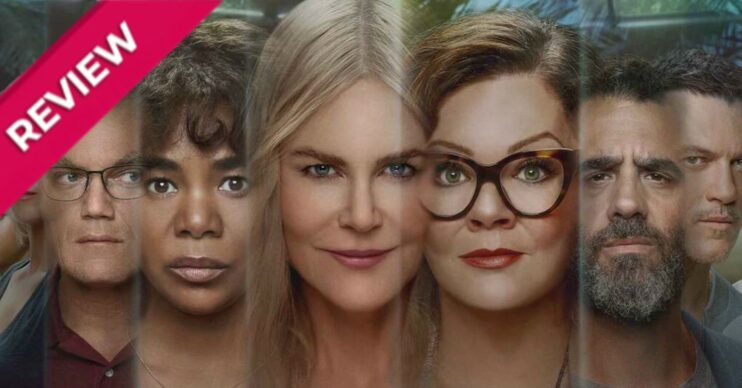 Nine Perfect Strangers review: Does Nicole Kidman thriller live up to the hype?

It drops later this month

NOTE: This Nine Perfect Strangers review is based on the six episodes available for review.

Nicole Kidman is back and this time she’s in healing mode as the lead of new thriller, Nine Perfect Strangers.

She stars as Masha, a self-help guru who, despite having no qualifications of note, has become the go-to life-changer for the middle classes who want to change their life.

Tranquillum House is a 10-day retreat that guarantees a new outlook on life. If it was real, Gwyneth Paltrow would probably write about it in Goop.

The story begins as the hand-picked clients arrive, hand in their phones, and hand themselves over to Masha and her trio of assistants.

The nine chosen participants all have their own reasons for being there. There’s a family grieving the loss of their son, a married couple struggling after winning the lottery, and a woman whose books aren’t selling well.

First world problems, are we right?

But what Masha plans for them go beyond eccentric into something a little more chilling.

This all-star cast is enviable, with Melissa McCarthy, Luke Evans, Bobby Cannavale, Regina Hall and Michael Shannon all part of the pack.

It starts slow, with the first episode dedicated to setting up their new life of luxury and how money doesn’t always buy happiness.

It’s only really after episode three that the show begins to kick up a gear. With weird rituals and practices and drug-induced fever dreams bringing out the best and worst of the participants.

Is Masha out of her depth? Or is she creating something magical?

Standout characters are the Marconi Family – Napoleon, Heather and daughter Zoe – who on the anniversary of their son’s suicide are still struggling to come to terms with it.

Asher Keddie in particular has some heart-wrenching scenes, with one gut punch after another of a mother’s guilt. It’s only made worse by husband Napoleon’s dedication to stay as positive as he can, lest he collapse otherwise.

Read more: Nine Perfect Strangers: Everything you need to know

Regina Hall’s Carmel also proves to be a fascinating character, that honestly needs more screen time. Appearing at first well put together and trying to move on from her divorce, she soon spirals as dormant anger issues rush to the service.

Somewhat surprisingly, it’s McCarthy’s jaded author Francis that doesn’t have much meat to her story. A considered love connection with another person at the retreat feels false and somewhat ham-fisted to give her something to work with.

Is Nine Perfect Strangers worth the watch?

Nine Perfect Strangers starts off a little slow but soon reels you in with its mysterious tale.

The series clocks in at eight, hour-long episodes, and by the end of episode six the train is fully steaming ahead to a twisted conclusion.

If you haven’t read the books, it’s probably best to go in blind rather than have anything spoiled for you.

We can’t wait to see how the rest of the series plays out.