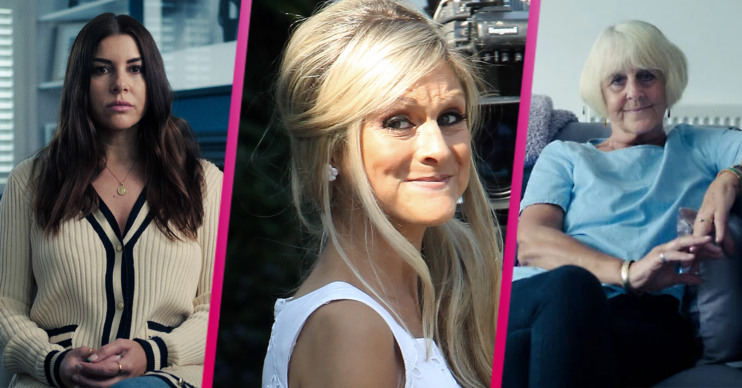 Nikki Grahame: Who Is She – 6 most painful moments from tonight’s documentary

The Big Brother star died a year ago

Nikki Grahame: Who Is She is a new documentary that airs on Channel 4 tonight (April 7).

It comes a year after Nikki‘s sudden and tragic death after a life-long battle with anorexia.

The documentary will see Nikki’s mum Sue, as well as friends and famous faces, chart Nikki’s rise to fame, her battle with the disease and her sad death.

ED! has seen a preview of the documentary and it’s an absolutely heartbreaking watch.

Here, we look at 6 of the most painful moments from the documentary.

Nikki Grahame: Who Is She – Sue details last time she saw Nikki

By far one of the most painful moments in the whole documentary is when Nikki’s devoted mum Sue details the last time she saw Nikki.

Sue had previously revealed that a friend found Nikki’s body and her mum insisted that it wasn’t moved before she got to her daughter’s flat.

She explains in the documentary that she was there when Nikki’s body was removed from the flat.

And what Sue reveals in the documentary is just heartbreaking.

“My god, watching them put my little girl in a bag, taking her down in the lift…

“I said to them, can you tell me which end her head is and they said yeah.

“And I just stroked it from the outside,” Sue reveals, breaking down in tears.

“They took her away and I didn’t see her again.

“Part of me has died. I miss her more than I can say.”

Nikki’s heartbreaking confession to her therapist

The documentary opens with Nikki in tears to her eating disorders therapist Mandy.

“I’m so sorry about this,” she cries, in scenes that are an incredibly tough watch.

“I’m such a state,” she says, as Mandy assures her it’s okay.

Speaking about understanding her anorexia, Nikki says: “Well I always found that the lower my weight was, the louder the voice was in my ear.

“The voice that’s telling me to self-destruct.”

Nikki is then seen making an absolutely heartbreaking confession, the first instance in the documentary that led us to reach for the tissues.

She admits: “The only time I feel confident and comfortable to look in the mirror is when I’m emaciated.”

Nikki and Imogen had been friends since they appeared on Big Brother together in 2006.

In the documentary Imogen is seen detailing her attempts to get Nikki to accept help and head to hospital in an ambulance.

“There was one Sunday morning when she called me and she said: ‘Imogen, I just want to die.’

“The first thing I done was call an ambulance. The paramedics came and she wouldn’t go in the ambulance.”

Imogen adds: “The paramedics told her: ‘One day your body will give out Nikki and we can’t take you against you will.’

Imogen adds: “I sometimes think, if she had got in that ambulance that day, we could’ve saved her.”

Nikki and Carly met at an eating disorders clinic, with Carly admitting she’d been there for nine months when Nikki was admitted.

The girls shared an instant connection, with Carly keen to help Nikki get back to health.

“I was much further into my recovery. I met her on the staircase. We looked at each other and I just felt really sorry for her because she was really really thin.

“I knew the pain she was going through. I just wanted to be there for her because I knew how scary it was to be that young and in hospital.

“From that moment we were literally inseparable,” she says.

Carly is then seen revealing that Nikki couldn’t eat when she arrived – and the “horrific” lengths the clinic took in a bid to make her gain weight.

“When Nikki came here she couldn’t eat, she was tube fed.

“They put a tube down your nose, into your stomach, while you’re awake.

Carly then admits: “I mean you’re held down to have it done.”

Sue invited the cameras into Nikki’s home, where she died last year, for the documentary.

“I’m here today at Nikki’s flat. I’ve been doing lots of sorting out. It’s really difficult to do, it’s tough, but I’ve got to do it,” Sue explains.

“I want to show you the dress that Nikki wore to the National TV Awards,” she says, before pulling the dress out of Nikki’s full wardrobe.

She wore the dress in 2006, when she won the NTA for Most Popular TV Contender.

“I love this dress so much. It is beautiful. It’s stained but then that’s Nikki. It wouldn’t be Nikki’s dress if it didn’t have stains on it,” Sue admits.

It’s then that she makes the heartbreaking confession.

“When I come here and stay at her flat I sleep here, on this bit in her bed, cuddling Pingu, who actually she was cuddling when she died,” Sue says, picking up a penguin stuffed toy.

“I cuddle him every night now because it brings me a little bit closer to Nikki.”

Hanging up the dress beside the bed, Sue continues: “And I hang this here, so that I go to sleep and have one last look at it and when I wake up there it is.

Perhaps the most heartbreaking moment of the whole documentary, though, is Nikki admitting that she wanted to live, just two days before she died.

She is heard speaking about her admission to hospital.

Of course, she died just a day after being discharged.

She is heard saying: “I’ve been here less than two weeks and I’ve actually gained 4kg.

“Yet there is that really sick part of my brain that is really angry at myself.

“I came so close to dying, like so close, and I [bleep]ed it by coming in here.

“I could’ve done it, I could’ve succeeded, but then I want to get well, so…,” she says, as her voice trails off.

Nikki Grahame: Who Is She airs tonight (April 7) on Channel 4 at 9pm.